Campaign Says 'No' to the Sexual Violence that Rages in DRC

KINSHASA, Democratic Republic of Congo — In mid-March hundreds of Congolese women, men and girls raised banners that read, Together, let us say No to the silence, for the dignity of the Congolese and Enough sexual violence! 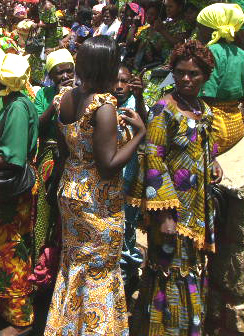 Women gather in Kinsasha to show their support for campaign kick-off.  Photo: UNFPA

With faces of determination, the women, men and girls waved these slogans high above their heads. More than 1,000 Congolese authorities and civilians, UN leaders, NGOs and civil society groups’ were gathered in Kinkole, a suburb of Kinshasa, to kick off a nationwide public awareness campaign aimed to eradicate an epidemic of sexual violence. An average of 1,100 rape cases are reported each month, according to UNFPA, the United Nations Population Fund.

“Sexual violence constitutes a plague in the DRC,” said Dr. Margaret Agama, the UNFPA representative for the country. “Initially, rape was used as a tool of war by all the belligerent forces involved in the country’s recent conflicts, but now sexual violence is unfortunately not only perpetrated by armed factions but also by ordinary people occupying positions of authority, neighbours, friends and family members.”

The widespread problem of sexual violence throughout DRC—it has been reported that 40 cases of rapes occur everyday in South Kivu—is coupled with a disturbing element of sexual brutality as women and girls are being gang raped, abducted and forced into sexual slavery.

Many survivors of sexual violence have received debilitating damage to their reproductive organs, resulting in multiple fistulas and incontinence. Women and girls have been left with broken bones, missing limbs and even burns. Some have been shot and stabbed in the vagina with bullets, bits of broken glass and corns of cob. Family men have been forced to sexually violate their daughters, sisters, and mothers at gun point.

In January, the signing of a peace deal officially ended the conflicts that have raged in the country for a decade. Thus, the campaign organized by UNFPA along with the national Ministry of Women, Family and Children, comes at an important time, as communities work to rebuild infrastructures and re-integrate over 1 million people displaced by the conflicts. 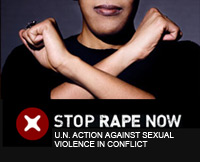 The campaign aims to raise the level of awareness on sexual violence throughout the national and international communities and to unite authorities, neighbours, survivors, friends and family members in its elimination.

“The DRC continues to record a high number of rapes in spite of the official end to the conflict. Adequate resources and the assistance of the international community are needed to address the problem,” said Dr. Agama.

The weak application of the law on sexual violence allows perpetrators to act with impunity, she added. Thus, the number of rapes reported understates the true severity of sexual violence in the DRC.

“Perpetrators benefit from the climate of impunity and the culture of violence to misuse the women and the children in the provinces, and in the country in general,” said Dr. Agama.

The need to end impunity is a main message in the UNFPA led campaign and has also become a key agenda for the country’s leaders. In February of this year the Congolese Minister for Women, Family and Protection of the Child, Philomène Omatuku, declared to the public, "I would say from now on that we women of the DRC, we say no to sexual violence, no to impunity. The Congolese women require peace."

The intensive, multi-faceted campaign to raise awareness and sensitize key actors at all levels is taking place in the 11 provinces of the DRC for one month. A wide range of communication channels – including media outlets, theatre, open telephone lines, films and video forums and debates – are being used to reach out to all, including the government and the diplomatic community. The campaign will also rely on the authority of recognized moral community leaders to influence public opinion. 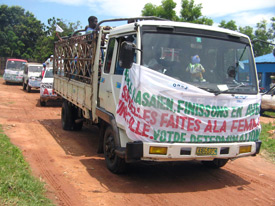 The caravan of cars, bicycles, motorbikes and trucks travels through the province of Bandundu . Photo: UNFPA

The DRC initiative, which is being kicked off with marches and motorized caravans of cars, bicycles, motorbikes, buses and trucks, is aligned with the international campaign that was launched earlier this year by the Secretary General of the United Nations, Ban Ki-moon.

“Wearing t-shirts relating the messages against sexual violence, women and girls, as well as men, have been involved in these caravans, during which, they are denouncing sexual violence through songs, dances, dramas etc. So far the engagement of the communities has been massive,” Dr. Agama noted.

In each province, keynote speakers have been governors, UN officials and other local prominent figures. When the caravan made its way to Bandundu, the governor invited all women who had experienced any type of violence to address him directly, encouraging survivors to end impunity by speaking out. He insisted that his door was always open and promised that he would strengthen the police force in its role as protector of the civilian population.

In order to widen the level of awareness within the DRC and also the international community, the UNFPA country office organized a media event that was attended by more than 60 national and international journalists.

Looking to the future 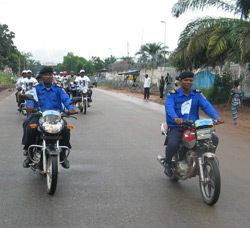 Security forces lead the pack to offer protection for the caravaners and show support for the basic human rights of women and girls. Photo: UNFPA

UNFPA has been aiding survivors of sexual violence throughout the DRC for many years by providing medical care, economic and social rehabilitation, and legal assistance.

UNFPA also played a key advocacy role in the adoption of the DRC law on sexual violence in July 2006. This law has broadened the definition of sexual violence to include acts such as sexual harassment, forced pregnancy, forced sterilization, and other brutal practices.

The challenge of providing assistance to the Congolese survivors of sexual violence has been compounded by budget limitations and the high cost of transportation in a country with a fragmentary and poorly maintained road system. Furthermore, the lack of adequate jails or prisons has led to the quick release of perpetrators. These factors, combined with cultural barriers and taboos, have left many victims unwilling to come forward and report the crimes that have been committed.

“Today, in the DRC, sexual violence constitutes one of the greatest forms of infringement of the basic rights of the populations and thus contributes to the increasing vulnerability of the communities as well as the institutions,” Dr. Agama said.

However the determination to combat sexual violence and the enthusiasm displayed by the Congolese population throughout the campaign, as well as the tough stance of President Kabila with his “tolerance zero” against perpetrators of

“Everybody has to be involved in fighting sexual violence in the DRC,” said Dr. Agama. “The women and girls who are affected constitute more than half of the population. They keep together the family, the community and are, therefore, the future of this country.”