NEW YORK -- On day two of the Commission for the Status of Women, the halls of United Nations headquarters were filled with government officials, and representatives of the UN, civil society, media and the private sector. An unprecedented 6,000 representatives of civil society registered to attend the UN meeting this year — a preponderance of them women.

In the official proceedings and numerous side events, participants reviewed progress, shared experiences and best practices, analysed gaps and challenges and discussed priority actions to accelerate progress on violence against women, the theme of this year's Commission. 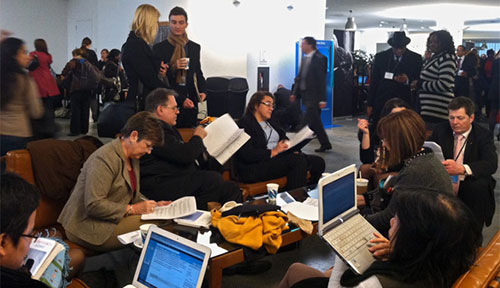 Much of the work, and networking, of CSW takes place informally, outside of the meeting rooms.

While the official business was underway in the General Assembly, quite a bit was happening nearby, in conference rooms, corridors and other meeting spots. UNFPA helped host three of the day's side events. Common themes of the discussions included the pervasiveness of violence perpetrated on the bodies of women and girls, all too often with impunity, often either culturally sanctioned, or at least tolerated. In the words of Kate Gilmore, UNFPA Deputy Executive Director (Programme), "Sexual violence is a socially transmitted infection."

Ms. Gilmore made her comments while moderating a panel discussion on sexual violence that included, El Salvador's First Lady, the UN Special Representative on Sexual Violence in Conflict, Deputy UN High Commissioner for Human Rights; UN Special Rapporteur on Violence against Women, and the Minister of Gender, Family and Children of the Democratic Republic of the Congo.

Panelists noted the brutality of sexual violence, especially in situations of conflict, where the bodies of girls and women become virtual battlegrounds, leaving women often scarred for life, while perpetrators go free. Ending impunity must be a first step in addressing the scourge of sexual violence, said Zainab Bangura, UN Special Representative on Sexual Violence in Conflict, adding, "Impunity is a denial of justice for victims and fuels further violence."

It was standing room only at a panel on sexual violence. Photo © Ilona Lalova/UNFPA

El Salvador's First Lady, Vanda Pignato, described practices in her country that have significantly reduced the prevalence of sexual violence. Ms. Pignato, who also serves as her country's Secretary for Social Inclusion, highlighted 'Ciudad Mujer', an initiative that seeks to improve the living conditions of Salvadorean women through an integrated focus and the promotion of women's rights.

At the Executive Director's Forum, leaders of agencies, including UNFPA's Deputy Executive Director (Management) Anne-Birgitte Albrectsen, talked about the specific approaches their respective organizations take in addressing the many forms of violence against women.

In his introduction to the event, UN Secretary-General Ban Ki-moon told the audience: "I am here as a man. A proud husband, father and grandfather. Violence against women and girls pains me deeply." His remarks captured on of UNFPA's priorities – the need to engage men and boys in ending gender violence.

The panel, moderated by UN Women Executive Director Michelle Bachelet, launched a joint statement stating that violence "has devastating effects on the lives of women and girls, including their sexual and reproductive health and rights, as well as their physical and mental health." Such violence can and should be prevented, the statement concludes, and notes that "the UN system stands ready to do its part".

More support given to ending female genital mutilation and cutting

At a panel on accelerating progress to end female genital mutilation and cutting, longtime activist and vocal advocate for the abandonment of FGM/C, Chantal Compaoré, the First Lady of Burkina Faso, who also serves as President of the Global Campaign to ban FGM, spoke about the positive effects the recent UN General Assembly resolution will have on the continued effort to speed up the abandonment of FGM/C.

But other panelists also pointed to the on-the-ground actions needed to understand and change social norms: As Kenya's Ambassador to the United Nations said: "Resolutions and legislation are important, but at some point we have to consider values. How do we deconstruct a mindset that values FGM?"

The representative of Portugal's Government as well as the Italian and UK panelists articulated the need to address the continuing practice within diaspora communities, and Ms. Albrectsen discussed the importance of training of service providers to provide sensitive care for complications of FGM/C.

United Kingdom Minister Lynne Featherstone took advantage of the occasion to announce the new commitment by DFID, the UK development agencty, of 35 million pounds (approx. $52.6M) towards programmes and research over the next five years for eliminating FGM/C in the next generation.