For breast cancer survivors and supporters in Palestine, a chance to come together

Gaza Strip, Palestine –  When Bahia was diagnosed with breast cancer, she had to contend not only with a frightening disease but also with a social stigma that left her feeling rejected and isolated. “I was bullied by my own community. They called me ‘the bald one,’” said Bahia, who lost her hair during chemotherapy. “What was even worse was that my one-year-old daughter was afraid of me.”

According to a UNFPA report, society’s negative perceptions of breast cancer and its association with death can prevent women from getting screened, leading to delayed detection. Many avoid discussing it with anyone or seeking treatment because it can affect family status, or they fear being abandoned by their husbands or harming the marriage prospects of their daughters.

Of newly registered cases of all cancers, 16.5 per cent were breast cancer, the most common type of cancer incidence in 2020. It also accounts for 32 percent of all female cancers, according to the Ministry of Health.

Bahia, who is in her early 30s, turned to the UNFPA-supported Jabalia Women’s Health Centre (JWHC), which offers a wig-making course and where, day by day, she was able to return to a semblance of normal life, even with the disease. “My hair grew again,” she said. “When I heard of the course, I immediately joined it. I made friends. We support and encourage each other.”

Of the 45 participants, 15 were cancer patients or survivors. The rest learned to make wigs “as a way to show support to the survivors,” explained In’am, a course trainer at the safe space.  “We collaborate with other institutions to make sure the wigs reach every woman who needs one.”

Wesam was one of the volunteers supporting those with the disease. She had a personal reason for getting involved.

“My mother is very sick,” said Wesam, with tears in her eyes. “She lost her hair and cannot tolerate the way people look at her.” Wesam had learned wig-making to make one for her mother, with whom she is very close, but witnessing her suffering took a toll on Wesam’s mental health. She reached out to JWHC for psychosocial support services, and when a coordinator learned of Wesam’s skills, she asked her to help organize a course for cancer survivors. “I tutored women how to make wigs – what better way to support my mother?” Wesam exclaimed.

For more than 20 years, the Jabalia Women’s Health Centre has provided  vocational and life-skills training, awareness-raising sessions on gender and gender-based violence, and legal and psychological counselling.

“We work for women and girls who seek our help,” said Mariam Shaqoura, head of women’s affairs at Abdel Shafi Community Health Association, the umbrella under which JWHC operates. “We listen to their stories and suffering. We help as much as we can, and make sure to involve and address the root cause of their agony – sometimes the husband, other times the extended family.”

Sometimes, the root cause is a devastating medical diagnosis. “The Jabalia Women’s Health Centre and the psychosocial support team plays a big role in changing the way survivors see life,” said In’am, the safe space trainer. “They are becoming confident and strong.” 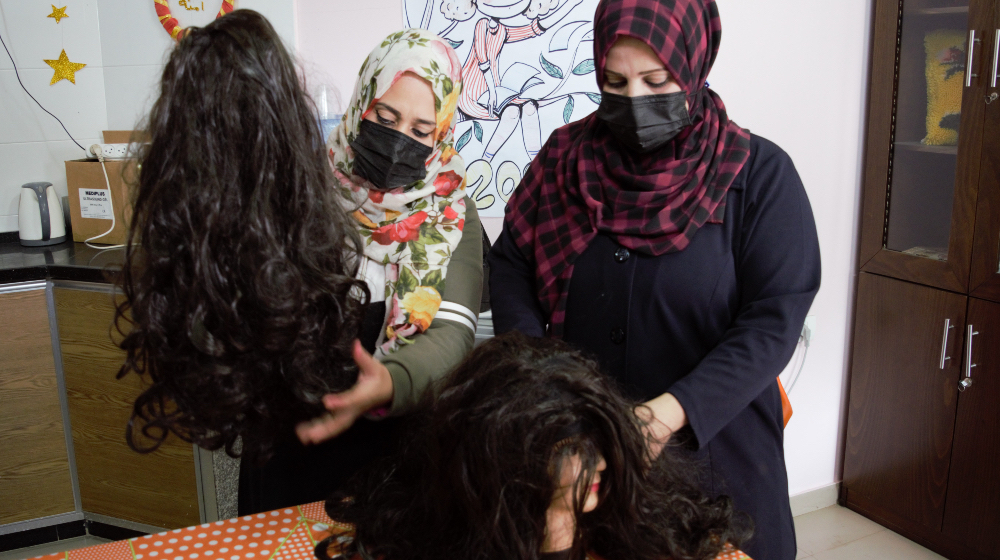 For breast cancer survivors and supporters in Palestine, a chance to come together