RABAT, Morocco – Najat’s voice trembled with emotion as she recounted her story.

“I met a man when I was 16 years old. He was eight years older than me. I eventually became pregnant and my family did not accept it,” said Najat.

“I went through the saddest days of my life. My mother took me to one of her friends in another city. I stayed there until I gave birth. Then I left my child with that woman and came back home. I felt I had lost my entire life.”

Najat soon realized that she could not live without her child and brought him back, against the wishes of her family. Fearing their daughter’s out of wedlock pregnancy would bring shame and dishonour, her parents cut off all ties with Najat and her baby boy.

Najat decided to break the wall of silence surrounding adolescent pregnancy and share her story earlier this year. She believes her decision to become a single mother isolated her and stopped her from finishing school, stripping her of her dreams.

“Today, I am 20 years old and my son is one. I can’t live without him. All my relatives and friends have let me down. I rented a room and I am doing all kinds of small jobs to raise my child,” she said. “My son’s father also let me down. I will never trust any man in the world again.”

The United Nations defines 'adolescent' as anyone between the ages of 10 and 19. 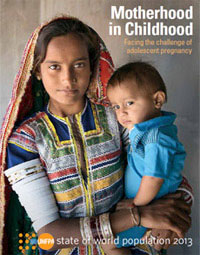 Wearing a colorful mask to cover her face and avoid stigma, another young girl joined Najat to share her story at an event hosted by UNFPA in the Moroccan capital, choosing to remain anonymous. She recounted being raped by a family member at the age of 17. After she became pregnant, fearing shame and scandal, she was forced into marriage by her family, only to fall victim to a violent husband

Today, she is not yet 18 years old and works to raise her child, striving to piece together her broken life.

A coalition of NGOs to fight child marriage

With support from UNFPA and led by the Moroccan NGO ‘Initiatives pour la Protection des Droits des Femmes’, a coalition of 10 NGOs was established in July 2013 to address the issue of child marriage.

Under the 2004 Family Code, sex outside of marriage is criminalized and the age of marriage is 18 for both girls and boys. However, a court authorization may allow girls younger than 18 to marry with the consent of parents and a medical expert. Child marriages accounted for 11 per cent of unions in 2011, according to the Moroccan Ministry of Justice.

The new coalition advocates for adapted and youth friendly sexual reproductive health information and services to help end gender-based violence and child marriage in the country. A social mobilization campaign against child marriage is due to roll out by the end of this year.

UNFPA is supporting national efforts to advocate for stronger legal restrictions to marriage under 18, in line with international agreements. The Fund is also helping to mobilize civil society by organizing debates and sensitization campaigns at both national and local levels. If they are enforced, national laws that ban child marriage can help eliminate girls’ vulnerability to pregnancy.