MAIDUGURI, Nigeria – “It was during the quiet hours, about 8:30pm, that Boko Haram came,” 15-year-old Goggoji told UNFPA. “I could see fire as houses were burnt.”

She and her mother were captured by the militant group and loaded onto trucks filled with women and girls. “They shot any young man they saw,” she described.

It was the beginning of more than two years of torment. She was only 12 and a half years old at the time, but that did not matter. “They came in large numbers to select wives among us,” Goggoji said. 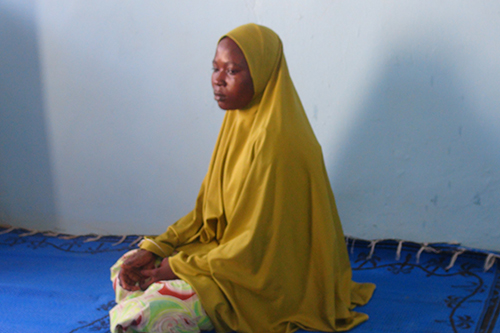 Goggoji, now 15, escaped a Boko Haram camp with her daughter by wandering for three days in the forest. © UNFPA Nigeria/Kori Habib

Today, she lives in a displacement camp in Maiduguri, where she and her 9-month-old daughter, Aisha, are receiving health care at a UNFPA-supported rehabilitation centre. Goggoji is also receiving psychosocial support, which includes counselling.

She is far from alone. Some 565 former abductees of Boko Haram, all of them women and children, are receiving care from the same rehabilitation centre. Like Goggoji, many of the young girls are already mothers.

“I made several attempts to run away,” Goggoji explained. “Each time I was caught, it meant being punished by 100 lashes. I would also be kept in the hot sun for hours.” She eventually managed to escape over the border to Cameroon, where she found help from a family friend.

But a Boko Haram fighter was sent to find her. He told her that her mother was being tortured, and that she would be killed if Goggoji did not return. “That was how they got me back again. After that day, I never saw my mother again,” she said, beginning to sob.

She eventually managed to escape for good, bringing her daughter into the forest where they wandered for three days before they came to a military camp.

But a river separated them from the camp. It took a team of soldiers, and a floatation device improvised out of two water containers, to rescue them. “Half way across the water, the current was so strong that it almost drowned us all,” she said. 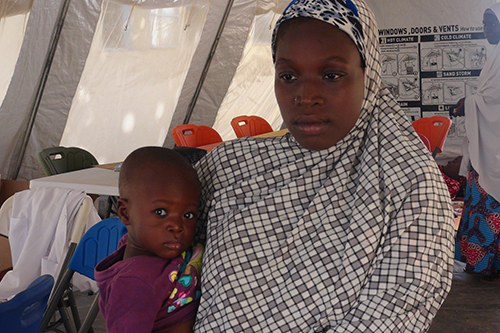 Hauwa and her son at the displacement camp in Maiduguri. © UNFPA Nigeria/Kori Habib

Today, at the rehabilitation centre, she and her daughter are slowly recovering. But they have a long way to go. And the scars of Goggoji’s experience will always be with her.

“I can still hear my mother’s voice screaming,” she said.

Giving birth on the run

Hauwa was also abducted two years ago, at age 13.

“I could I see a group of men as they walked into our compound. They came right into the room to where my sick father lay.”

The fighters announced they would take Hauwa. When her father refused, the men laughed and pointed a gun at him. “At that point, my father had no option but to allow me to be taken away,” she recalled.

Hauwa was taken to a compound in the bush. “One evening, a large number of them came and informed us that they would be taking us in as wives.”

The man who abducted her forced her to be his so-called "wife."

“After the first six months, I became very sick. My ‘husband,’ as he was called, came in with one woman who confirmed I was pregnant. There are no doctors in the forest. No clinics.”

While she was pregnant, she discovered that the rest of her family had also been captured. She was allowed to visit her parents, who were starving. They ate only the fruits they could collect and whatever they could barter.

Together, they made plans to run for it.

“The escape was stressful to my condition, being pregnant,” Hauwa said. “It took us three days and three nights on foot to reach Gwoza,” their home town.

She gave birth while on the run.

They are now receiving counselling and medical care at the rehabilitation centre in Maiduguri.

Seven months have passed since their escape, but Hauwa is still struggling. The counsellors at the centre must encourage her to breastfeed her baby.

Since the outbreak of the Boko Haram conflict, thousands of people have been abducted and over a million have been displaced by the violence. In Borno State alone, there are 1.3 million internally displaced people, according to recent UN reports.

UNFPA has deployed hundreds of counsellors and health-care professionals to areas affected by the crisis, assisting not only former captives but also displaced families and host communities.

Since 2014, UNFPA has supported more than 87,000 safe childbirths in the crisis-affected states, and has provided psychosocial support to more than 174,000 people. Over 54,000 dignity kits, which contain essential hygiene supplies such as sanitary napkins, soap and clothes, have also been distributed.