GEORGETOWN, Guyana—Barber shops across Georgetown, Guyana are buzzing with chatter about the latest trends, community happenings, neighbourhood gossip and now, ways to protect young people from HIV and AIDS. UNFPA, the United Nations Population Fund, has identified barber shops and beauty salons as information hubs, and is using them to spread the word about HIV prevention.

The project involves the training of shop staff to answer simple HIV-related questions, pass out informational material, dispense both male and female condoms to clients – and even provide on-site counselling and testing. As a result, young people in Guyana are given access to information and resources not readily available elsewhere in their communities. And this is important because their small country (population 751, 223) has one of the highest HIV prevalence rates in the region: about 1.6 per cent for pregnant women, according to UNAIDS. Among sex workers, the prevalence rate shoots up to 26.6 per cent. AIDS is currently the leading cause of death among the 20-49 age group.

Juanita Huburn, a customer at DJ’s Magic Fingers, a hair salon that participates in the programme, described the Guyanese society as ‘closed’ when it comes to issues regarding sexuality. “You do not talk about sex, they just say you should not have sex, but this is not realistic,” she said. 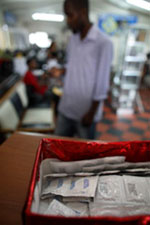 Shops and salons were chosen based on their location in malls, parks, popular attractions, or low-income communities. Owners who opened their doors to the project got added marketing exposure for their small businesses and were provided with incentives, such as access to promotional materials. “Shops were informed how their companies would be promoted through the project, and the economic value of participating,” said UNFPA Guyana Liaison Officer, Patrice La Fleur “They would most importantly provide safe places to discuss sexuality and the prevention of HIV.”

Once the locations were identified, two employees from each shop were sent for training on basic HIV and AIDS education and prevention means. They were also taught to properly monitor the project and introduced to safe practices within the context of their own work (for example, ensuring the sterility of hair cutting machines, razors, needles for stitching and weaving, manicure and pedicure implements, and tattooing and body piercing equipment).

In addition to training participants about sexual and reproductive health and gender issues, the project also focuses on building life skills such as communication, healthy relationships, and leadership. “Participants expressed personal gains in their quality of relationships with friends, family, and clients,” said UNFPA Programme Officer, Babsie Giddings who monitors the project. 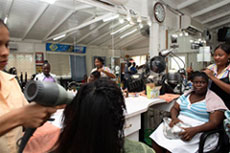 Since the programme was put in place businesses report a steady boost in clientele and more shops have come on board. “Business has increased about 5 per cent since we joined this programme,” said Kevin John, owner of the Barber Shop Kevin’s Reflections. He believes it may be partly because people know his salon equipment is sanitized. Currently over 7000 male and 400 female condoms are dustributed monthly by requests in the shops and salons.

Work on the project was initiated last year through efforts of the UN Country Theme Group, chaired by UNFPA. Also collaborating on the project is a local NGO, Youth Challenge Guyana.

UNFPA provides continuous support with regular follow-ups and monitoring for participating barber shops and salons. The project aims to afford some 2000 young people access to information, skills, services and supplies they can use to protect their health.