“They were afraid I would die”: Early motherhood puts girls at risk in the Republic of Moldova

CIMISLIA, the Republic of Moldova – Maria* gave birth to her first child when she was 16, an age when most of her peers were graduating from secondary school. Today, at 22 years old, she has three daughters.

“People who meet me for the first time don’t believe that I have three children. They think that they are my little sisters,” Maria said.

She met the man who would become her husband, Victor*, when she was 15. She became pregnant soon after.

At that time, she did not know anything about contraception or the risks of an early pregnancy. Information about sexual and reproductive health was not available at school or home.

“I have never discussed such things with my mother. I was ashamed,” she said. “Our biology teacher was older than the retirement age. I think she was ashamed, too, so she skipped these topics.”

Girls who become pregnant at an early age are extremely vulnerable. They are more likely to drop out of school and face a lifetime of poverty. They are also more likely to encounter dangerous complications. Globally, complications from pregnancy and childbirth are the leading cause of death among adolescent girls.

Maria did, indeed, drop out, even though she had been among the best pupils in her school. She also faced serious health problems.

“I was very weak”

After Maria’s first daughter, Galina*, was born, doctors advised her to wait at least three or four years before conceiving again. “They told me that I needed to protect myself… but no one told me how to do that,” Maria recalled.

Immediately after the delivery, she received an injectable contraceptive that lasted three months, but she did not receive further doses.

She was soon pregnant again. She had another girl. A year and a half later, her third daughter was born. All were delivered by Caesarean section.

Each pregnancy left her weaker than the last.

“I weighed 48 kilos,” she said. “I lost weight after the first birth, and continued losing weight after every pregnancy. I was very weak.”

During her third pregnancy, her doctors were alarmed. “The doctors urged me to abort. They were afraid I would die,” Maria said. “I didn’t agree. I told them I would give birth to the child even if it risked my life.”

After her third daughter was born, she had a long discussion with the doctors and decided to undergo a tubal ligation, a form of permanent contraception.

But her challenges are far from over.

The family is barely making ends meet. Their furniture consists of two old beds, and their home has few toys or children’s books.

Galina, 5, looks after her sisters instead of attending pre-school.

“She often tells me that she wants to go to kindergarten, too, with the other children, but I can’t let her go now. We don’t have any clothes, and we can’t afford to buy any,” Maria told UNFPA.

“Maybe she’ll go to the kindergarten in the fall.”

Maria’s story is not unique in the Republic of Moldova. More than 2,300 teenage girls gave birth last year, the National Bureau of Statistics found. Only one third of women of reproductive age use modern contraceptive methods, according to Demographic Research Centre.

Together with the World Health Organization, UNFPA provided technical assistance in the development of the country's National Programme on Sexual and Reproductive Health and Rights, which was recently adopted.

The programme, a pioneer in the Eastern European Region, lays the foundation for providing age-appropriate education on sexual and reproductive health rights in schools.

It will also help improve the availability of modern contraceptives, and align family planning services with international standards.

It will empower women and girls like Maria to make healthy choices for their bodies and futures.

And for now, Maria is dreaming of a brighter future.

She hopes to find a job when her children are older. She would like to be a shop assistant in the district capital.

She would spent her first paychecks on her children, she said. “I don’t need anything. I just want them to be all right.” 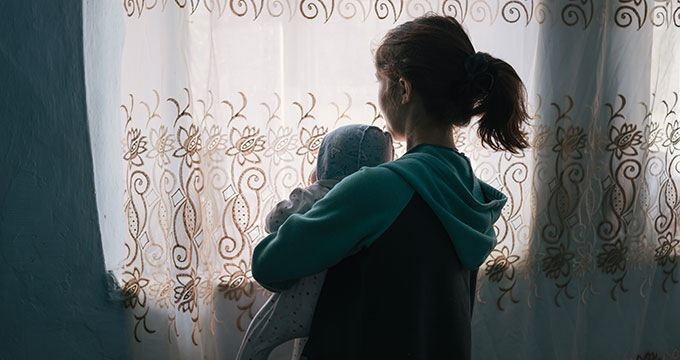 “They were afraid I would die”: Early motherhood puts girls at risk in the Republic of Moldova