BANGUI, Central African Republic – An entire generation of Central African youth has been scarred by three years of relentless bloodshed. At the height of the crisis, villages were burned to the ground, and sexual violence was widespread. Hundreds of thousands were forced to flee their homes. But today, as a fragile stability takes hold, a peer education programme is helping the country’s young people to reject violence.

Miriam* was 14 when she was raped by a rebel soldier in front of her parents.

"It was 10pm when we heard people looting next door. My father came out of the house to see what was happening, and the soldiers took advantage of the fact that the door was open to get inside. They started hitting my mother, and when they saw me, they pounced on me and raped me," she said.

After the assault, Miriam told her story to Geraldine, a peer educator.

"I referred her to a health centre for exams and fortunately, she was healthy,” Geraldine told UNFPA. “I spoke a lot with her and progressively she regained confidence, and now she talks about her experience during our sessions to raise awareness among other youth."

Embracing peace in the “red zone” 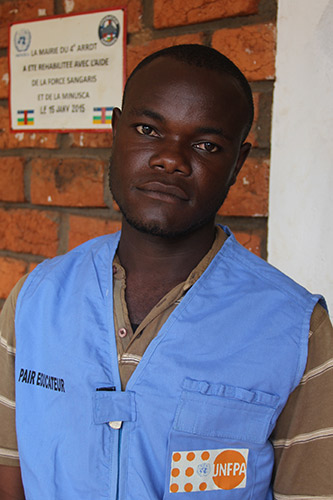 Wilfried Sakabieli is a peer education supervisor. He says young people are the key to securing a lasting peace in the Central African Republic. © UNFPA/CAR

During the crisis, the capital’s 4th arrondissement was an epicentre of rebel protests. The district was widely known as the "red zone" of Bangui.

But today, when 27-year-old Wilfried Sakabieli walks the streets, he is greeted as a kind of celebrity. Mr. Sakabieli is a peer educator for the district, and he is in high demand.

He and his fellow educators reach out to young people with information about their sexual and reproductive health and human rights. In addition to explaining how to prevent unintended pregnancies and sexually transmitted infections (STIs), they speak out against sexual abuse and drug use, and they promote peace.

"When we started awareness-raising, it was difficult because people considered what we were doing a joke,” he said. “Now we are approached every day by associations, schools, religious groups as well as individuals for advice or educational talks because they have seen the results of our work."

Mr. Sakabieli is one of the 50 peer education supervisors who have been trained by UNFPA, in partnership with the Ministry of Youth. A further 100 peer educators have also received training. "We have organized ourselves in small groups to cover the five divisions of the 4th arrondissement," he explained.

He and his army of peer educators tell community members: “We are the first victims of violence. We must change our behaviour and build peace instead of war. Without peace we cannot go to school, find a job or start a family.”

They also give special attention to the most vulnerable young people.

"Often, during our awareness-raising, young victims of sexual abuse or rape approach us to seek help,” Mr. Sakabieli said. They give the survivors health information and refer them to health facilities and the police, he added.

“You are the heroes of this country”

Almost 60 per cent of the country’s population is under age 25. The brutal conflict has left many of them unmoored – displaced, out of school, out of work or simply struggling to resume a sense of normality. The uncertainty leaves them vulnerable to abuse, disease, unintended pregnancy and even further unrest.

"This project is a model for mobilizing youth and sensitizing them on a culture of peace and human rights," explained Fali Flore, coordinator of the project.

It will reach at least 100,000 adolescents and young people, according to the project’s planners. Over 700 young people were reached at the last awareness-raising meeting alone.

“Regardless of use of violence in the past, you are the generation that is working to rebuild the country,” United Nations Secretary-General's Envoy on Youth Ahmad Alhendawi told hundreds of young people assembled at a recent event in Bangui. “You are the heroes of this country. We need to tell the entire world the important work you are doing.”

Following the success of the initiative in the 4th arrondissement, UNFPA, with partner UNICEF, has launched further efforts to empower young people around the country, including those in Bangui, Bimbo, Boda, Yaloké, Sibut, Dékoa, Kaga-Bandoro, Bambari, Koungo and Bouar.

"This is our country, and we will not have peace without our commitment," Mr. Sakabieli told UNFPA. “And I am deeply committed to bring back peace in the Central African Republic.” 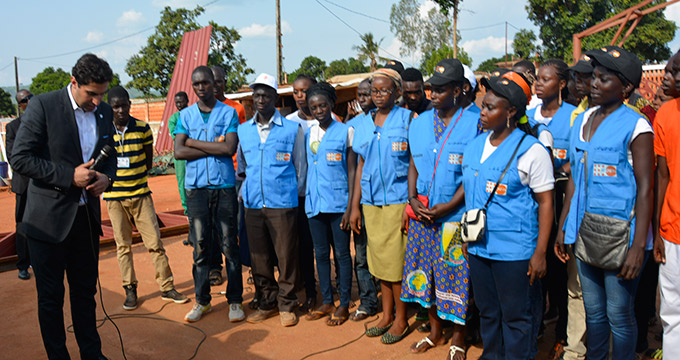