MARAWI CITY, Philippines – In May 2017, 26-year-old Umme Limbona, found herself trapped inside the Amai Pakpak Medical Center in Marawi City. The city had been seized by a local armed group inspired by the Islamic State of Iraq and the Levant (ISIL, also known as ISIS). “The terrorists had barged in the hospital, and we were trapped for the rest of the night,” she told UNFPA. “They shot a police officer.  We felt hopeless.”

That’s when she decided to take a leap of faith – literally.

“I was very scared, but I managed to escape by jumping out of a window from the third-floor supply room onto the terrace of a neighbouring building,” she explained.

It was an extraordinary moment of courage, but it was not her only heroic act.

In fact, Ms. Limbona is a social worker specializing in supporting survivors of gender-based violence, including sexual violence, exploitation, and trafficking. She works on an all-woman team that provides a full range of care to women and child survivors – helping them find the courage and strength that she found in herself.

The fierce urban combat in Marawi was declared over in October 2017. Yet the effects of that crisis are lingering. Nearly two years later, an estimated 66,000 people remain displaced, living in evacuation centers, temporary shelters and host communities.

And the situation is particularly challenging for women and girls. Gender-based violence is pervasive even in times of peace, but it is exacerbated during armed conflict and other emergencies. For instance, overcrowding in shelters elevated risks to women and girls, reports indicate.

"I hear about a lot of abuse towards women in Marawi, especially after the conflict,” said Dr. Nadhira Abdulcarim, a doctor on Ms. Limbona’s multi-disciplinary team. “Many women are in temporary shelters.”

She and Ms. Limbona work at a UNFPA-supported Women and Children Protection Unit, a facility that helps coordinate the various services survivors require, including medical treatment, psychosocial support and legal assistance.

Police officer Chrestine Espinorio is also a key member of their team. She provides protection and helps survivors access justice.

“I want to be there for women when their rights are being trampled – anytime, including during an emergency,” Officer Espinorio told UNFPA. “I would like to contribute to restoring our fellow women’s and girls’ dignity and hope.”

Ms. Limbona, Officer Espinorio and Dr. Abdulcarim are three of the hundreds of thousands of humanitarians around the world who have dedicated their lives to helping others in the heat of a crisis. This 19 August is World Humanitarian Day, which commemorates the bravery and sacrifices of humanitarian workers.

This year’s World Humanitarian Day pays special tribute to women humanitarians, who make up nearly half the world's humanitarian workforce and are at particularly high risk of robbery, sexual assault and other violence.

This year also marks the 25th anniversary of the landmark International Conference on Population and Development, where 179 governments agreed to empower women, eliminate gender-based violence and “give greater attention to, and manifest greater solidarity with, poor families and families that have been victimized by war, drought, famine, natural disasters and racial and ethnic discrimination or violence.”

“Although it is quite challenging and emotionally heavy work, I feel very fulfilled because we are extending help to those women and girls who never thought that anyone could help them, especially in emergencies,” said Ms. Limbona 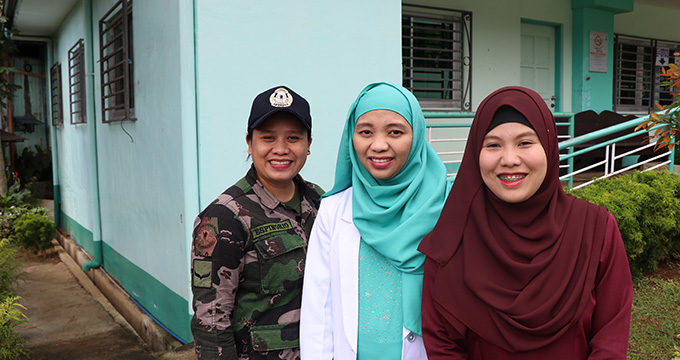