With the age of marriage rising in Viet Nam, and sexual activity outside marriage increasing in urban areas, young women find themselves at risk of forced sex, unwanted pregnancies, unsafe abortions, and sexually transmitted diseases, including HIV. Contraceptive use, though higher among urban youth than their rural counterparts, remains infrequent. Now the Government is finding ways to provide young people with the information and skills they need to chart their life course amid changing sexual behaviour and norms.

HA LONG CITY, Viet Nam -- In several provinces of Viet Nam, a new twist has been added to the traditional marriage ceremony.

After the bride and groom say their “I do’s”, the officiate pronounces them husband and wife.

But before actually signing off on the marriage certificate, he invites them to a counseling session on sexual and reproductive health skills and knowledge.

The initiative, entitled “Sexual Reproductive Health Communication and Counselling Integration in Marriage Registration Ceremonies”, has been implemented in the four wards of Quang Ninh, Hue, Nghe An and Can Tho provinces since 2008. It’s an initiative designed and implemented by the Viet Nam Family Planning Association with technical assistance from the UNFPA and financial support of the Government of Luxembourg.

The main focus of the model is to provide sexual and reproductive health knowledge and life skills to young couples before they start their families. Sexual behaviour and norms are changing rapidly among young people in Viet Nam, who are more mobile and marrying later than earlier generations. Yet one-third of young people still face barriers when trying to access reproductive health information or services they require and deserve.

Before the certificate is signed, an opportunity to prepare for marriage

The counselling includes interactive sessions that promote gender equality, discourage gender-based and domestic violence, encourage men to take on household and child-rearing responsibilities and generally aim to bolster women’s status in the family and society. Many communication and awareness-raising activities have been organized, with participation from adolescents and young people, to equip them with information and knowledge related to pregnancy, family planning, reproductive health, and prevention of HIV. After the counselling, young couples receive marriage registration certificates in formal ceremonies. 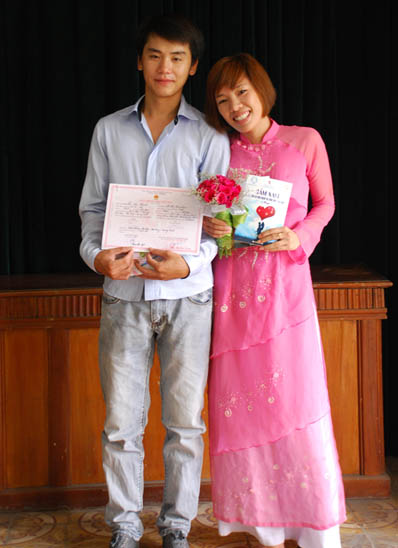 This multi-sectoral approach is based on an understanding that reproductive and sexual health issues are an important aspect of personal development, with links to a range of other health and social services, according to Bruce Campbell, UNFPA Representative in Viet Nam. “Promoting knowledge of sexual and reproductive health, as well as conflict resolution and negotiation skills, can help young people protect themselves from non-consensual sex, unwanted pregnancies and sexually transmitted infections, including HIV,” he added. “It can also help them make responsible and informed decisions about their lives.”

Without the right information and services  young people remain vulnerable

Mr. Thanh, a taxi driver and his fiancée Ms. Loan, who works in a hotel, are among the five young couples who attended the marriage registration ceremony in Ha Long city in October 2011. Thanh and Loan are both 24 years old and their wedding party will be organized next month. Like many other Vietnamese young people, they do not have sufficient knowledge about sex and relationships, reproductive health and HIV. “Sex is easy to joke about, but difficult to talk about," says Thanh "Whenever I have a question about sex, I usually seek the information on the Internet. Sometimes I discuss it with my friends.”

Although many young Vietnamese are exposed to images and stories about sex in the media every day, getting reliable, accurate and balanced information is not that easy. Vietnamese parents are hesitant to talk about sex with their children, as they are afraid that it will encourage sexual experimentation. "I feel shy about discussing sex with my parents, and they also avoid talking about it to me. In fact, my parents never talk about sex and sexual health with me," says Loan.

Unmet need for contraception may lead to abortions

Research has revealed various reasons for a high number of unintended pregnancies, including incorrect use of contraceptives, limited access to reproductive health care and lack of life skills, for example, the ability to negotiate condom use. Reliable data is limited, possibly owing to the stigma associated with abortion.

The second Survey Assessment of Vietnamese Youth also shows that young people still know alarmingly little about HIV and AIDS. Only 42.5 per cent of Vietnamese youth aged 15 to 24 have comprehensive knowledge of HIV transmission, far less than the global target of 95 percent by 2010.

The age of marriage is rising, and sexual activity outside marriage is increasing in urban areas. Young women find themselves at risk of forced sex, unwanted pregnancies, unsafe abortions, and sexually transmitted diseases, including HIV. Contraceptive use, though higher among urban youth than their rural counterparts, remains infrequent. Continued high levels of unwanted pregnancies and unsafe abortions indicate a considerable unmet need for family planning among young women.

The national family planning programme in Viet Nam provides contraception and reproductive health information to different population groups, particularly married couples. These services are also offered to adolescents and youth, but access has been limited and data from the Multiple Cluster Survey suggests that more than 10 per cent of young people have an unmet need for sexual and reproductive health services.

Ms. Hanh and Mr. Cuong, 28 years old, were married in 2008. They are enjoying their married life and have a two-year-old son. They are one of five couples who participated in the first marriage registration ceremony organized in Ha Lam ward, Ha Long city, Quang Ninh province in 2008.

Hanh recalls that three years ago, like many other young people, she knew little about safe sex and reproductive health. "I felt like a fish out of water before getting married. When I listened to the radio or TV talking about safe sex, I did not really understand what it was. There were many things about married life that I wanted to know but I did not know who I should ask," says Hanh.

On the day Hanh and Cuong came to the commune peoples' committee to register their marriage, they were invited to attend the marriage registration ceremony, together with other young couples in the commune. When they were asked about their knowledge of sexual and reproductive health they did not know how to answer.

After receiving the counselling on sexual and reproductive health, both Hanh and Cuong gained a lot of interesting and useful information that they never had before. "The counsellor provided us with information and knowledge on safe sex, family planning, gender equality, conflict resolution and negotiation skills that helped me protect myself from non-consensual sex, unwanted pregnancies and STIs, including HIV," said Hanh.

In the past, Hanh thought that family planning was the wife's matter, not the husband’s. Now she has learned that if both husband and wife discuss this together and select an appropriate contraceptive method, both can enjoy a healthy sex life. The information and knowledge provided by the counsellor has helped Hanh take good care of her family. Whenever she needs more information about sexual and reproductive health, she asks the ward's counsellor for advice. "I feel very lucky to participate in the model. I also learned about the economics of raising children, and the value of planning our life together, which I found extremely useful for my life, and you can see that I enjoy my married life very much," she says.

Scaling up the model throughout the country

The UNFPA-VINAFPA model funded by the Government of Luxembourg has helped Vietnamese youth in the project sites acquire the skills necessary to develop and sustain healthy and happy lives, particularly in areas that were not being reached. While the model will be phased out in May 2012, it will be scaled up to 2,000 other communes and wards throughout the country in June 2012 and will be financed through the national budget. This is also a good example of a UN-supported demonstration model that is now being taken to scale through government resources.

Reproductive health services and information for adolescents and youth are under-resourced. Most of the adolescent reproductive health programmes and activities to date have been pilot projects financed primarily by international resources. Few of the pilots have been rolled out to other areas, and sustainability is a concern for many of the existing pilot schemes.

Investing in health for young people and adolescents: a smart choice

“With technical support from UNFPA, we are promoting healthy sexual behaviour. We acknowledge young people have the right to have safe sex, so we have created an environment for them to talk about this," said Dr. Nguyen Thi Hau, Chairwoman of the Quang Ninh Family Planning Association. However, she stresses that: "To optimize the effectiveness of this model, a short pre-marital education course for couples should be conducted in which information and knowledge on sexual and reproductive health, life skills and other related issues can be provided. The model should be scaled up nationwide with more training for young couples."

Viet Nam has entered a period known as the ‘demographic bonus’, recording the highest proportional level of young people who are entering the workforce in Viet Nam’s history. "Today, young people between 10 to 24 years represent almost a third of the total population. While this demographic window is open, Viet Nam has an opportunity to take advantage of this tremendous resource by ensuring that every young person has access to basic social services, health, education and training, so that they are well prepared to make a significant contribution to Viet Nam’s continued socio-economic growth and development," said UNFPA’s Mr. Campbell.