IRIBA, Chad — The air at the Touloum refugee camp in eastern Chad, is eerily calm. Many of the 23,000 refugees have been here since 2004, when they fled violence in the Darfur region of Sudan.

After four years, they have settled into daily routines: buying goods from the camp market, collecting water from the dwindling supplies, sleeping in temporary structures. Many hold little hope of returning to their homes ? or what is left of them. 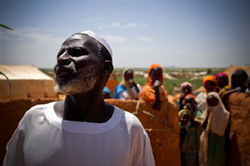 Abraham Souleymane has lived at Touloum since 2004. He believes the community is stronger now, thanks to the training sessions.  Photo: Micah Albert/UNFPA/Chad

Touloum is one of twelve camps scattered across the eastern border of Chad; collectively, the camps provide shelter for over 250,000 Sudanese refugees dependent on aid workers for the simplest things, including daily meals. Until last February, armed rebels cruised the border pointing guns at, and sometimes shooting, camp dwellers, aid workers ? anyone within range. These threats have now diminished.

Nevertheless, women and girls in refugee camps are still in danger, not just from outsiders, but also from deeply entrenched cultural norms ? such as early marriage, female genital mutliation/cutting and domestic violence. Although they jeopardize the health and rights of women and girls, these traditions and practices have been a part of Sudanese and Chadian culture for centuries. But group sensitivity trainings, supported by UNFPA, the United Nations Population Fund, are helping both men and women understand that harmful traditional practices compromise basic human rights.

According to national statistics, 52 per cent of adolescents in Chad are married by age 16, and 58 per cent of girls have already had a child by the age of 18. Early childbearing is a leading cause of obstetric fistula and maternal death. The dangerous practice of female genital mutilation/cutting is also widespread and deeply rooted, and national statistics report that 45 per cent of women have undergone the procedure in Chad. Sudan has a prevalance rate of about 70 per cent.

“Gender-base violence is unfortunately widespread in this region,” said Cheikh Tidiame Cisse, the UNFPA representative in Chad. “And communities accept early marriage and female genital mutilation.” But cultures are not static, as UNFPA’s State of World Population 2008 report argues, and people are continuously involved in reshaping them. Changing deeply entrenched mores requires cultural fluency, patience and creativity, the report explains. And under the tents of the Touloum camp, cultural attitudes and practices are being examined, and new perspectives are slowly emerging. 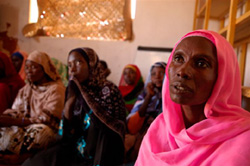 A group of women at the camp listen to a weekly ‘woman’s empowerment’ class. This week the topic is on the rights of the child. Photo: Micah Albert/UNFPA/Chad

Days in Touloum are long, hot and uneventful ? with few job opportunities and even fewer social gatherings. But one group of 40 or so older Sudanese male refugees, mainly from the Zaghawa tribe, is using their free time to question their own perspectives on women and human rights. They meet three times a week in the only building available in Touloum to take part in trainings.

Many concepts taught at the men’s trainings clash with traditional beliefs. However these men ? who have lost so much ? are open to alternative ways of looking at the world. “The only good that has come from this conflict is that we’ve learned from the violence,” said Abraham Souleymane, one of the refugees who attends the training sessions. “We feel that we have come out of the dark and learned a new way. After this violence ends in our region we will be able to go back home, and it will be a better place. ”

After their own sensitivity trainings, the men walk through the the camp and invite families to participate in a friendly and informative dialogue about violence against women and women’s rights, even though talking about such concepts openly, and with both men and women, has long been a cultural taboo.

Intrigued by the conversation, adult community members wander into the hot desert sun, and even curious children and young people stop their outdoor games to listen in. The men have a goal to educate at least 10 households a week, and for this work they receive about $30 per month from UNFPA to help support their families.

“We are happy to have this work and help our people at the same time,” said Mr. Souleymane. He’s been in Touloum since 2004 and has seen a positive impact on his community as a result of the discussions and trainings.

Some of Touloum’s refugee women are pleased as well. “We are happy now that our husbands treat us better and we don’t have fear,” one said.

In a room next to where the men meet, a group of refugee women gather every Thursday for discussions and trainings on similar topics relating to their health, cultural barriers and harmful traditions. These are also supported by UNFPA in partnership with the Christian Children's Fund. At a meeting in September, the subject was the rights of the child. These mothers and mothers-to-be were learning for the first time that their offspring possess certain inalienable rights recognized by the international community. 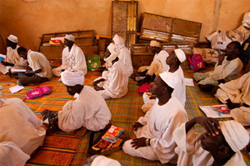 In group meetings, these Sudanese men are learning to think in new ways about women and their rights. Photo: Micah Albert/UNFPA/Chad

Some of these women will take what they learn and become community educators or even pursue additional training to become birth attendants. Others will simply ? yet profoundly ? take the new concepts home in hopes of influencing their children and, especially, their husbands so that abuse within the family stops. Even if this doesn’t work, there is the chance that their children will grow to grasp the concept of equal rights and stop the cycle of abuse.

“For the moment, community awareness has progressed and gender equality is more respected during community activities,” said Mr. Cisse. “More than 60 leaders are committed to reducing the prevalence of gender violence, and, at least in their families, the domestic violence is scarce. However, it will take time to have a more direct impact on these behaviours and their ensuing cultural problems.”

Harmful cultural beliefs usually run deep, and often require time, patience and cultural fluency to snub them out, as the State of the World Population report affirms. Mr. Cisse emphasized that because of this, the road ahead will not be easy for these refugee women and girls. “Culture and tradition have a lot of weight on how these women are treated and viewed. And any change in the perceived inferior status of women needs to be negotiated at the community level,” Mr. Cisse said.

“Attitudes towards these traditions and women’s rights in general must change first in order for harmful traditions to evolve,” he continued. Otherwise, those who challenge traditions may face rejection or stigmatization. They might be misunderstood by their families and friends, endure more beatings at the hands of their husbands, or even be divorced. That’s one of the reasons why it is strategic to involve older, well-respected men, who may stand a better chance of influencing attitudes.