UNITED NATIONS, New York – The world is currently facing its worst refugee crisis since the Second World War, due to conflicts, persecutions and natural disasters intensified by climate change. And tens of millions still living in their homes or displaced within their own countries are also in critical need of humanitarian services. From 23-24 May, leaders and stakeholders from around the world are convening in Istanbul, for the first-ever World Humanitarian Summit, to chart a way forward to support all those impacted and build a more stable world.

To succeed, they will have to address the needs and protect the rights of affected women and girls, and incorporate their leadership and knowledge into all plans and responses. However, although progress has been made towards addressing the unique issues faced by women and girls, too often they remain overlooked in emergency settings.

Here are 10 things you should know about women and girls in crises:

1.  Of the more than 125 million people in need of humanitarian assistance worldwide, over 75 per cent are women and children. 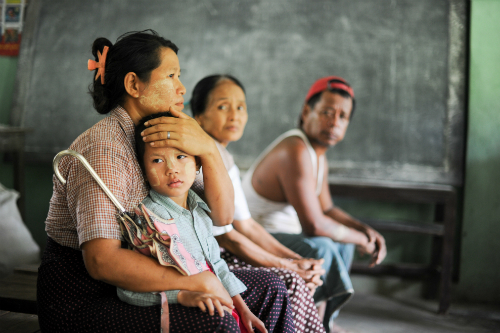 Families displaced by floods and a cyclone in Myanmar wait for services at a UNFPA-supported centre. © UNFPA Myanmar/Benny Manser

Women often stay behind during conflict and natural disasters to take care of children and family members, while men may leave for the frontlines or to find jobs elsewhere. As they try to get by with little support in chaotic and dangerous situations, women and girls are exposed to death and disability, hunger, exploitation and gender-based violence. In conflict settings, just travelling to the local market can put their lives at risk.

Women and girls best understand these daily needs and risks, and must be a part of designing the humanitarian responses intended to prevent them.

2.  In 2015, 61 per cent of maternal deaths occurred in 35 countries affected by an emergency situation or fragile conditions.

Their average maternal mortality ratio was on par with England’s between 1800 and 1850. 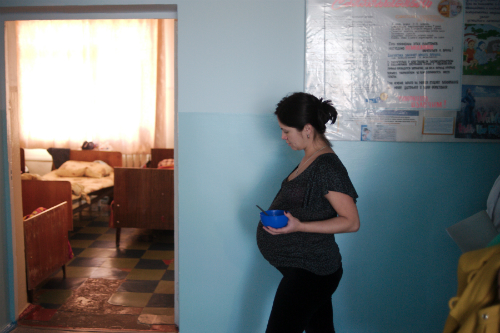 Elena was forced to flee her home in eastern Ukraine's conflict zone while several months pregnant, due to constant shelling. © UNFPA Ukraine/Maks Levin

Due to insecurity, lawlessness and destruction of health facilities and other infrastructure, women are often prevented from accessing life-saving health services in emergency situations. In many cases, reaching the nearest maternal clinic or hospital can prove life threatening.

3.  Approximately four times as many women as men died in the 2004 tsunami in Aceh, Indonesia. 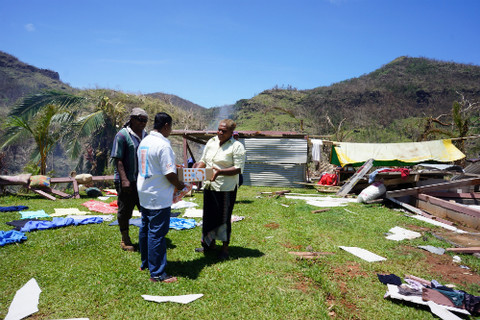 During natural disasters and their aftermath, women are, on average, more likely to die than men. In the 2004 tsunami, many women died because they stayed in their communities to look for their children and relatives, instead of fleeing from the danger. In addition, more men than women could successfully swim and climb trees to safety.

These disparities must be addressed in the immediate aftermath of emergencies.

4.  Of the 10 countries with the highest rate of child marriage, 9 are fragile states. 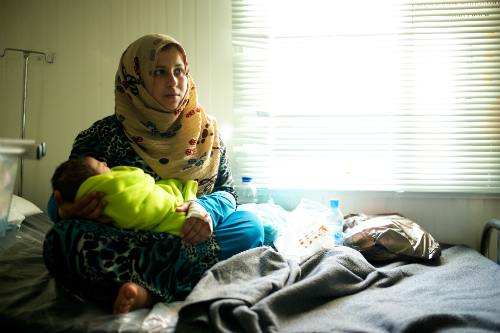 In crisis settings, parents often perceive early marriage as a way to protect girls from violence and shield the family from further economic stress. As a result, rates of child marriage often increase substantially.

Raising awareness of girls’ rights and intrinsic value and ensuring that families have access to basic services and income from the very onset of an emergency are vital to curbing child marriage.

5.  Ninety per cent of early first births occur among child brides – and complications during childbirth is the second-leading cause of death among adolescent girls worldwide. This risk is compounded in crisis settings. 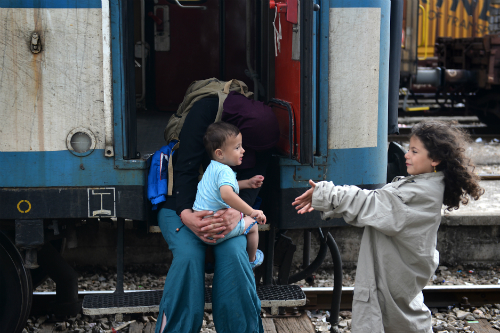 From child marriage and adolescent pregnancy to rape and trafficking, being young and female is one of the most dangerous risk factors in emergency settings. And these risks increase even more when girls are separated from their parents and families.

It is critical that adolescent girls have access to health and counselling services specifically designed to support and protect them.

6. Globally, at least 35 per cent of women have suffered from gender-based violence. While data is limited, anecdotal reports from around the world – from Ecuador to Yemen – show that its prevalence sharply increases during emergencies. 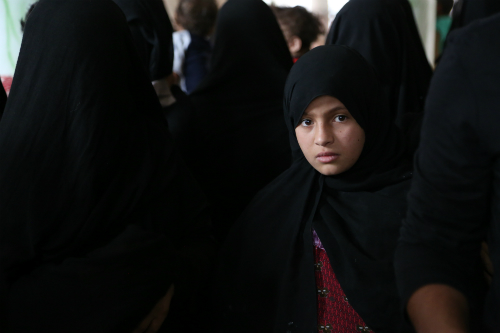 During crises, loss of support networks and property, limited access to jobs and weak rule of law increase women's and girls’ vulnerability to gender-based violence.

Even though this violence is generally under-reported, all humanitarian personnel should assume it is occurring, treat it as a serious and life-threatening problem and take actions to prevent it and provide comprehensive services to survivors.

7.  Sexual violence against women is often deployed as a systematic tool of war. To date, at least 200,000 women have been sexually assaulted during the ongoing conflict in the Democratic Republic of the Congo. 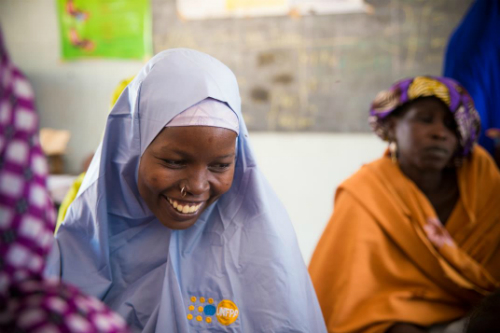 A survivor of Boko Haram, an armed group known to employ sexual violence as a tactic of war, receives psychosocial support in Nigeria. © UNFPA Nigeria

Because rape is often viewed as an attack on a woman or girl’s family and culture, many armed groups systematically employ it to erode the fabric of communities. This systematic sexual violence – whether  perpetrated by state actors, armed forces associated with the state, or non-state armed groups – remains a grave concern in the Sudan (Darfur), South Sudan, the Syrian Arab Republic, the Democratic Republic of the Congo, Iraq, Syria, Somalia, Nigeria, Mali, Libya and Yemen.

Conflict-related sexual violence generally takes place against a backdrop of structural gender-based discrimination. Implementing policies to empower women and girls and end impunity for perpetrators are essential steps to ridding countries and societies of the scourge of rape as a tool of war.

8.  In disasters and humanitarian emergencies, women are more likely than men to suffer from food insecurity. Even though women produce more than half of the world’s food, they comprise 70 per cent of the world’s hungry. 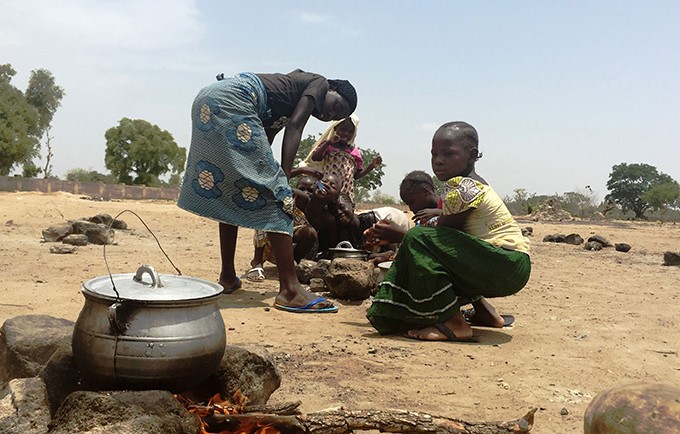 In many societies where females are considered to be lower status than men, women and girls receive less food than their male counterparts. In crises, food is often limited, and this discrepancy is exacerbated, especially if only male heads of households are registered in refugee or displaced persons camps.

Women should always be consulted about their needs and priorities to ensure that food distribution in humanitarian settings is equitable.

9. Today, more than half of refugee women and girls live in cities, not in refugee camps. 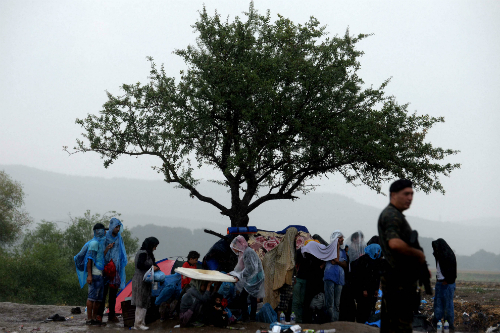 Refugees build  a makeshift shelter under a tree as an armed guard looks on. © UNFPA/Nake Batev

In contrast to a refugee camp, cities can present opportunities to remain anonymous, earn money and build a better future. But instead, many refugees find themselves isolated, impoverished and discriminated against – without access health and support services.

Women and girl refugees in cities require information and health services, opportunities to earn an income and safe spaces to socialize with peers, learn new skills and make connections to the wider community.

10.  The average time of displacement among the world’s 60 million refugees, half of whom are women and girls, has now reached 20 years. 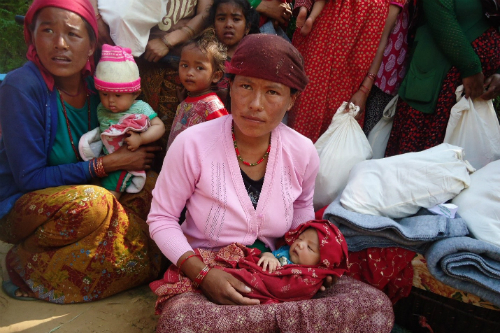 The 2015 earthquake in Nepal completely destroyed the homes of 600,000 Napalese families. Many remain in temporary housing and in need of services and education. © UNFPA Nepal/Santosh Chhetri

Extended displacement and surviving experiences of brutal violence can negatively impact the mental health of refugees, leaving them with feelings of hopelessness and fear regarding their futures.

Parents worry about the impact on their children, who are often growing up with little or no memory of their home or of stability – and with limited access to education.

Investing in the education, long-term wellbeing and empowerment of children and adolescents can give refugees hope, a sense of purpose and a path to the stability needed to build a brighter future.