Official representatives of 38 countries concluded the Conference on Population and Development for Latin America and the Caribbean by approving the Montevideo Consensus and committing themselves to strengthening and advancing progress on a range of population and development issues beyond 2014.

Around 800 delegates, representing government, civil society and youth organizations, gathered to assess regional progress towards the goals of the ICPD Byond 2014 at the conference, organized by United Nations Economic Commission for Latin America and the Caribbean (ECLAC) and the Uruguayan Government, with the support of UNFPA. Together, they reviewed the results of an extensive survey of ICPD   progress and challenges in implementing the ICPD Programme of Action in the region

A report summarizing the results of the survey was launched at the Conference. This was used as a reference point for participants as they discussed how future regional policies could accelerate progress and deliver the vision of the ICPD Programme of Action in a 21st century context. Speakers included Uruguayan President Jose Mujica, his Foreign Affairs Minister Luis Almagro, Alicia Bárcena, Executive Secretary of the Economic Commission for Latin America, UNFPA Executive Director Dr. Babatunde Osotimehin, and Enrique V. Iglesias, Secretary General of the Ibero-American Association.

Concluding the Conference, Governments agreed on a forward looking agenda that prioritized actions on sexual and reproductive health and rights; gender equality and key issues for adolescents and youth.

This regional conference was  part of the formal UN process to review progress, gaps and challenges in achieving the objectives of the Programme of Action of the 1994 International Conference on Population and Development (ICPD).

International Conference on Population and Development Programme of Action 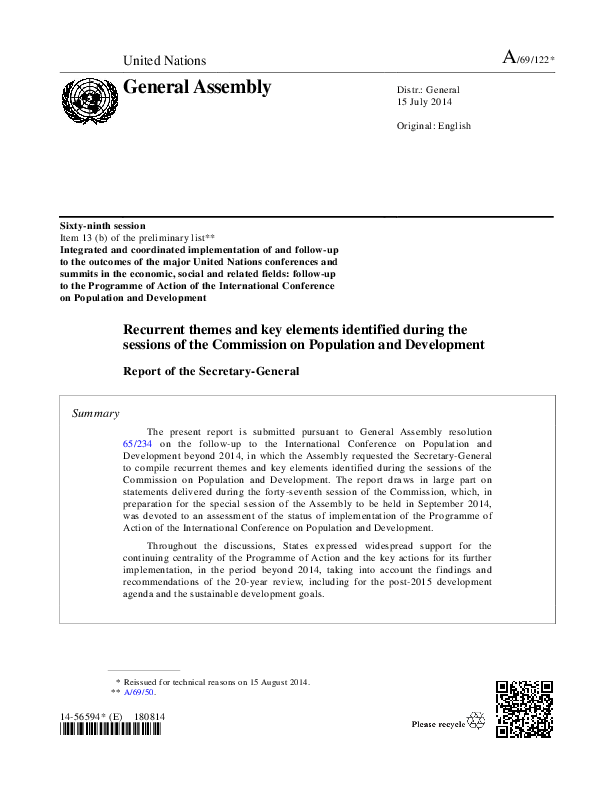 Recurrent themes and key elements identified during the sessions of the…