HARGEISA – Asha Ali Ibrahim, 41, has been performing female genital mutilation (FGM) on girls in Diaami, Hargeisa and other parts of Somalia since 1997. July and August are her busiest months of the year. “This is the peak season, when parents bring their children to be cut,” she told UNFPA.

July, August and September are something of a “cutting season” for many girls around the world, when the break from school means they have time to undergo, and recover from, FGM. Though there is little formally collected data, experts say that FGM is commonly practiced during the school vacation period in parts of Guinea, Nigeria and Somalia.

In some cases, girls even travel from abroad to undergo the procedure. And in some places, it is a precursor to child marriage, which may also take place during school holidays.

FGM is carried out for a variety of reasons. In some places, it is the belief girls must be cut to control their libido. In others, it is the perception that intact girls are dirty or ugly, or that cutting is a prerequisite for marriage. But the practice causes serious medical problems, including haemorrhage, infection, complications in childbirth and even death. 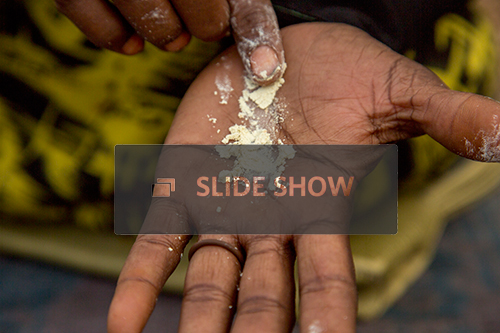 In all cases, FGM is an internationally recognized human rights violation.

About 98 per cent of women and girls in Somalia have undergone some form of FGM, according to a 2011 survey. The most common type involves cutting the genitals then sewing them closed, which can cause significant and long-lasting harm.

Somali girls typically undergo this procedure between ages 7 and 10, but Ms. Ibrahim says girls brought from abroad – especially from the United States and Europe – are usually older, between 12 and 14 years old. “It is a bit cumbersome to carry out the procedure on tissue that is more mature, and the grown up girls struggle more than younger ones,” she said.

Ms. Ibrahim is clear-eyed about some of the dangers. When she took over the role of circumciser from her aging mother, she was motivated in part by a desire to protect girls’ health.

“My mother was using one razor blade on all girls she cut. My daughter got sick soon after being cut by my mother, and I was informed at the hospital that the infection may have occurred from the procedure,” she explained. “I had been understudying my mother, so I asked her to stop carrying out FGM and I took over.” 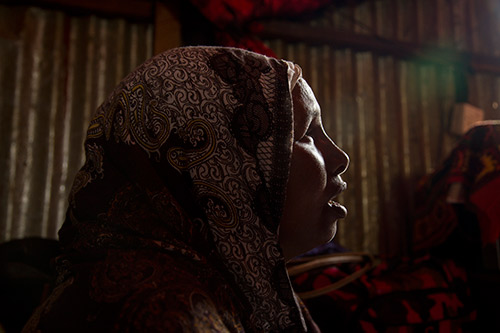 Ms. Ibrahim says FGM is an important cultural practice. “Circumcision is important as a transition to adulthood," she told UNFPA. © UNFPA/Georgina Goodwin

Ms. Ibrahim uses one razor blade per client to avoid infections. Her other tools include a small bottle of lidocaine, disposable syringes, balls of cotton wool, raw egg that she says heals the wound, a powdered concoction of traditional herbs and penicillin to prevent infection, a thick white thread to sew up the girls after cutting them, and some methylated spirits for cleaning up. Ms. Ibrahim obtains these supplies over the counter from local pharmacies.

Despite her meticulousness, there have been mishaps. Ms. Ibrahim says she has rushed haemorrhaging girls to hospital. Still, she takes pride in her work, and feels it is an important cultural practice. She denies it causes problems during childbirth.

Her own young granddaughter is due to be cut this season, though the procedure has been postponed. “She’s been unwell recently and I am waiting for her to be better before I circumcise her,” she said.“Circumcision is important as a transition to adulthood. It turns a girl into a woman and this is why all the girls in my homestead have to be circumcised,” she told UNFPA.

“The world is changing”

“Schools are closed for two months between July and August, and this indeed the peak season for FGM,” said Ahmed Jama, a UNFPA specialist working on the issue of FGM. “Girls travel from the West and from Djibouti to be cut here.” 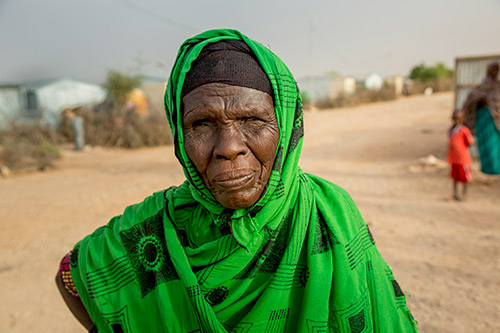 Cibaado Ismail knows all too well the dangers of FGM. Her daughter died in childbirth from complications related to the practice. © UNFPA/Georgina Goodwin

UNFPA partners with the government, health workers, local organizations, as well as religious leaders and youth activists to encourage their community and policymakers to abandon the practice.

The Hargeisa Institute of Health Sciences revised its midwifery curriculum last year, with help from UNFPA, to teach how to manage FGM-related complications that arise during childbirth. The programme also trains future midwives to become advocates for abandoning the practice.

“The world is changing, and Somalis are changing too,” said Nimo Hussain, the institute’s director.

Religious leaders like Sheikh Almis Yahye Ibrahim, 47, are encouraging these changes. The head of International Horn University, he is one of six sheikhs in the Arab region who have formed a network to fight FGM. He also preaches about the harms of FGM to the roughly 5,000 people at the Ibrahim Dheere Mosque.

But the biggest differences will be seen in his daughter’s generation, where girls are increasingly being spared the practice.

None of Sheikh Ibrahim’s three daughters have been cut. “I wouldn’t want to destroy anything about them. They should remain the way Allah created them,” he said. 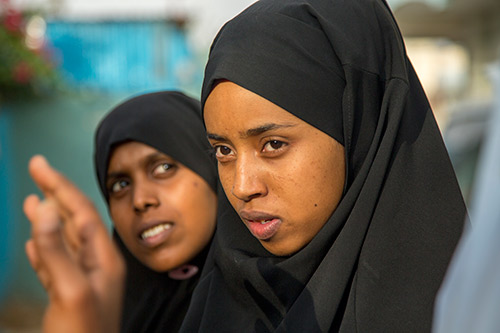 The biggest changes will be seen in the next generation, as young people take the lead in reevaluating the practice. © UNFPA/Georgina Goodwin

Activists in the Y-Peer youth network have also take on the issue.

And they have taken the messages to heart.

“I can only marry a girl who is over 18 and is not a victim of FGM,” declared Abdirahman Mohamed, 26, a Y-Peer project officer.

“I wouldn’t marry any girl who has undergone FGM because I don’t want to live with the health complications,” Mustafa Abdirahman, 19, another Y-Peer member, told UNFPA.

Still, these brave youth are the exception. FGM is still widespread, and its negative consequences continue to ravage the lives of women and girls .

Eighty-year-old Cibaado Ismail knows this all too well. She lives in the Rugta camp for internally displaced persons, just outside Hargeisa.

“An FGM awareness campaign in the camp helped me understand the negative effects of the practice,” Ms. Ismail said. “I have since banned all my 10 female grandchildren from being cut.”