As the conflict enters its fifth year, Yemen remains the world’s worst humanitarian crisis with staggering levels of humanitarian needs. Eighty per cent of the population – 24.1 million people – need some form of humanitarian assistance.

The conflict in has been characterized by cycles of displacement and return. As many as 4 million people have been displaced and remain displaced since the start of the conflict. Over 2.5 million people were displaced in 2015 and 2016, at the start of the conflict, and another 327,924 were displaced in 2017. Over 730,000 people were displaced in 2018. In 2019, displacement was more localized, with households staying closer to their usual place of residence and placing a burden on smaller population centres within the same governorate. In 2019, almost half of the families displaced were living in informal settlements, whereas in 2018 the largest proportion of displaced families stayed in rented accommodation or with host families.

Following a 10-month lull in hostilities, fighting broke out in mid-January on several frontlines, including Nihm District in Sana’a Governorate, Sirwah District in Marib Governorate, and Al Maton in Al Jawf following a series of attacks on military sites resulting in heavy casualties. 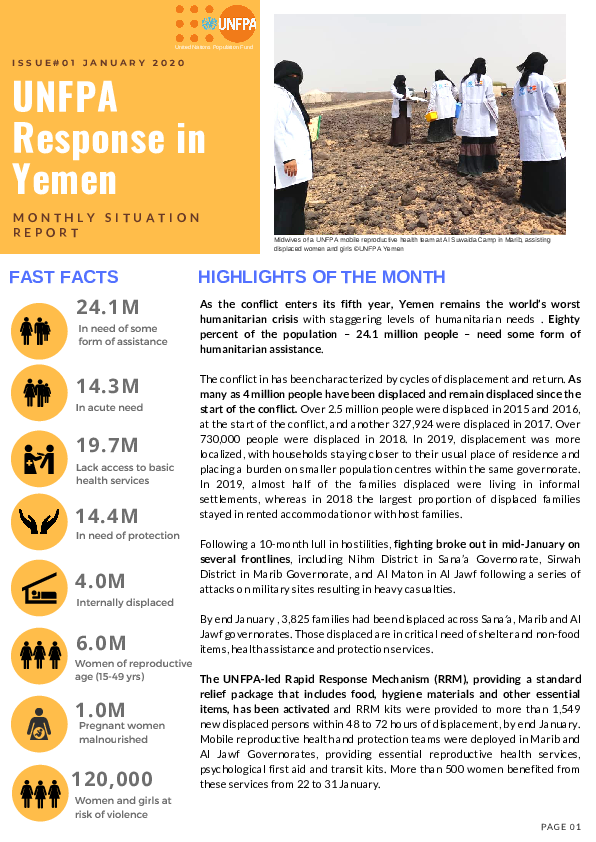