By the end of 2012, the world hosted an estimated 15.4 million refugees and persons in refugee-like situations. Of these, some 10.5 million were under the mandate of the Office of the United Nations High Commissioner for Refugees (UNHCR) and 4.9 million under the mandate of the United Nations Relief and Works Agency for Palestine Refugees in the Near East (UNWRA). Over 87 per cent of all refugees (13.4 million) had found asylum in developing countries. Asia hosted the largest number of refugees (10.0 million), followed by Africa (3.1 million) and Europe (1.5 million).

While the North has experienced a higher absolute increase in the migrant stock since 2000 (32 million) compared to the South (25 million), the South recorded a higher growth rate. Between 2000 and 2013, the average annual rate of change of the migrant population in the developing regions (2.3 per cent) slightly exceeded that of the developed regions (2.1 per cent). Among the major areas, Oceania registered the highest annual growth rate during this period (3.0 per cent), followed by Asia (2.6 per cent), Latin America and the Caribbean and Northern America (2.1 per cent each), Europe (2.0 per cent) and Africa (1.4 per cent). 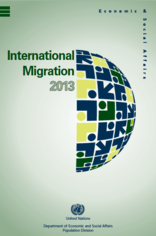