2.      We welcome the Cairo Conference as a manifestation of the variety of human cultures and traditions. Despite differences in beliefs and customs, we are of the view that leaders and peoples of the world should help bring about universal harmony and cooperation. Parliamentarians have a major role to play in this regard.

3.      We therefore attach great importance to a successful outcome of the International Conference on Population and Development, which comes at a pivotal time in the development of partnerships for global strategies identified in the series of United Nations conferences on environment, human rights, social development, and the role of women. We support the strategy of fully integrating population issues into all development planning policies and programmes. We therefore call on representatives to the ICPD to reach a consensus on the Programme of Action of the ICPD.

4.      Parliamentarians the world over have long recognized the delicate balance between population and natural resources. We believe that the population issue should be seen not in isolation, but within the larger context of sustainable development of the planet for the betterment of humankind: economic activity that increases the quality of life for all people through curbing excessive consumption and generating productive growth; alleviating  poverty; achieving sustainable agricultural and industrial production, energy and natural resources in  harmony with the environment; and improving health care and the quality of, and access to,  education. Actions we take now to overcome the population and development problems of today will decide the future course of humankind. Resolution of such problems is essential to assuring dignity of all human beings. In addition, formulation of   new and wide-ranging economic policies supportive of sustainable development, and initiation of international agreements based on such policies and approaches are essential.

5.      We welcome the approach that places family planning in the broader framework of reproductive health care. We urge all national governments to make responsible efforts to resolve their population issues in a way that respects their own national and cultural identity, values and tradition. We therefore commit ourselves, as elected representatives of the people, to do our utmost to remove all remaining barriers in our countries that inhibit access to family planning services,  information and education, as well as to help support the provision of reproductive health and family  planning services as widely as possible. We further urge Governments to ensure that all population and development policies and programmes in our countries safeguard internationally recognized human rights.

6.      We acknowledge the fact that abortions constitute a major public health concern for women all over the world. Since the use of family planning methods may prevent the prevalence of unplanned pregnancies, we call upon all national Governments to reduce the need for abortion by providing universal access to family planning information and services.

Gender Equality and Empowerment of women

7.      The empowerment of women and the improvement of their political social, economic and health status are highly important ends in themselves. We further believe that human development cannot be sustained unless women are guaranteed equal rights and equal status with men. In this process women should be seen not merely as the beneficiaries of change but as the agents of change as well. This entails an enhancement of their own gender awareness. We believe that education is the single most important element on the road to equality and empowerment of women. Education should also aim at eliminating negative gender stereotypes in order to improve the status of women,with a view to achieve cooperation and partnership between men and women. We therefore strongly support the education goals set forth in the ICPD Programme of Action as adopted in Cairo, and commit ourselves to removing all legal, social and cultural barriers in our countries that discriminate against women and prevent their full participation in society, including in public and political life. We call upon legislators all over the world to join us in our efforts to empower women as a matter of national priority, and we call upon Governments to enforce legislation in this respect.

8. Despite some improvements in human life expectancy, preventable and treatable illnesses are still the leading killers of young children and women. There remains at least half a million women dying annually from the complications of pregnancy and childbirth and 99.5% of these maternal deaths occur in developing countries. Large numbers of people remain at risk from infectious, parasitic and respiratory diseases. HIV/AIDS is the cause of a high incidence of deaths. Therefore the targeting of financial resources, particularly from donor countries, to these vulnerable groups is urgently needed to focus on reducing child and maternal mortality rates.

9. We therefore support the right of all people to have access to primary health care by the end of the current decade and pledge to work to reduce the disparities in health conditions and mortality risks between and within countries as detailed in the goals contained in the Programme of Action.

10.      The quality and success of population and development programmes depend, to a considerable extent, on how strategically a country allocates its resources among various sectors. This in turn depends on the social, political, economic and cultural realities of the country and its population policy and programme priorities. We accept the responsibility as elected representatives of the people to translate public support for population and development activities into the most beneficial distribution of budgetary, human and administrative resources. We take note of the strong international consensus on the need to mobilize significant domestic and external financial resources and endorse the estimated resource requirements set forth in the draft Programme of Action. Additional resources to population and development programmes should be made available by shifting resources, especially from defense expenditures.

11.      We therefore pledge to work to enact legislation to increase domestic funding for population and development programmes, as appropriate, and call upon the international community to provide the resources required to implement activities to reach the goals and objectives of the Programme of Action. At the same time, efficient use of existing resources is also important and should be pursued through such measures as decentralization, peoples' participation, a focus on target groups and an increase of national capacities.   Call to Action

12.      Given our role in the civil society as representatives of people, we parliamentarians are uniquely placed to implement the ICPD Programme of Action, as adopted at Cairo, at the national and subnational level and to introduce a new concern for the planet and for humankind for the pursuit of national policies of our governments. We call on parliamentarians everywhere to:

- enact legislation to enable Governments to formulate and implement national population policies and programmes specifically~ improvement of the legal, social, economic and cultural status of women;

- appeal to Governments which have not done so to sign the Convention on the Elimination of  Discrimination against Women to have their parliaments ratify the convention and to monitor its implementation;

- establish mechanisms for parliamentarians to monitor and evaluate such policies and programmes on population;

- approve budgetary provisions to increase financial resources allocated to the implementation of population policies and programmes, and to enact legislation in support of such provisions;

- generate public support among constituents for the mobilization and allocation of domestic resources to support national population and development policies and programmes;

- create greater awareness among policy makers and the general public about population and development issues, within the global context of sustainable development;

- promote the active participation of local governments, community groups and non-governmental organizations, especially women's groups, in  implementing the Programme of Action as adopted at the Cairo Conference;

- establish and/or strengthen, at subnational, national, regional and global levels, parliamentary committees on population and development;

- promote and expand cooperation among parliamentarians around the globe in the field of population and sustainable development.

From Commitment to Action

13.      We hereby pledge to translate our personal commitment into political action as set forth in this Declaration, both in our national legislatures and elsewhere, as appropriate, and to encourage others to join us in meeting this urgent challenge. 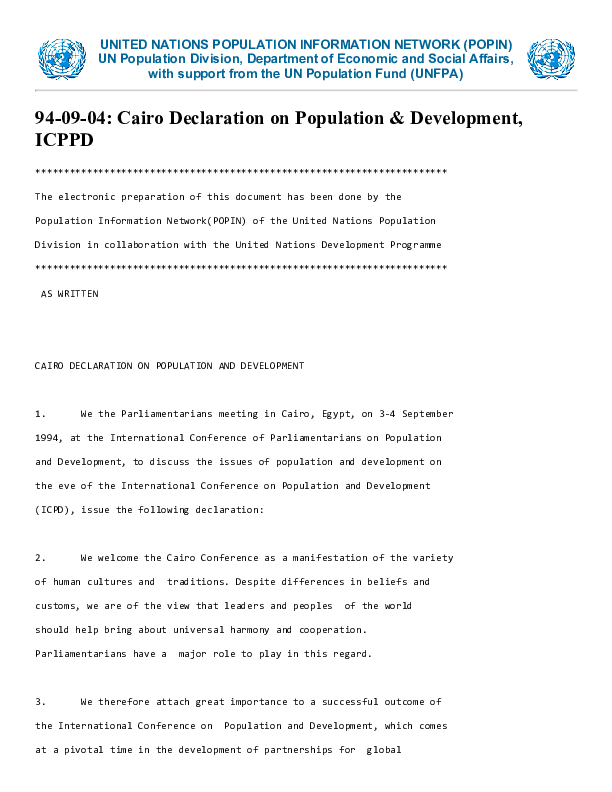