Estimates developed by WHO, UNFPA, UNICEF and The World Bank

This inter-agency report presents the global, regional, and country estimates of maternal mortality in 2008 and assesses trends in maternal mortality levels since 1990. These new estimates show that notable progress, but the annual rate of decline is less than half of what is needed to achieve the Millennium Development Goal target of reducing the maternal mortality ratio by 75 per cent between 1990 and 2015.

The publication also summarizes the challenges involved in measuring maternal mortality and explains the methodology of the 2008 estimates. The final section discusses the use and limitations of the estimates, with an emphasis on the importance of improved data quality for estimating maternal mortality. The appendices present the sources of data for the country estimates as well as MMR estimates for the different regional groupings used by the different agencies involved.

Reducing maternal mortality by three quarters between 1990 and 2015 is one of the indicators for Millennium Development Goal 5, improving maternal health. With only five years left until the 2015 deadline to achieve the MDGs, these new estimates allow closer examination of maternal mortality levels, and can inform planning of reproductive health programmes and guide advocacy efforts and research at the national level. These internationally comparable estimates are also needed at the international level to support the achievement of MDG 5. 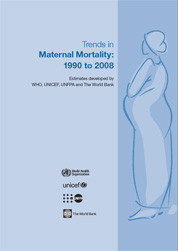