Programming to Address Violence Against Women

This is the second volume in a series that documents best practices in preventing and responding to violence against women. These eight case studies feature initiatives from Algeria, Guatemala, Honduras, India, Indonesia, Nepal, Sri Lanka and Zimbabwe, implemented by governments and other partners with support from UNFPA. They can inform efforts on ending violence against women, which is both a human rights violation and a public health concern.

Disseminating these good practices is one step towards sharing and learning from one another. In India and Nepal, national partners worked together to institutionalize a coordinated response to violence against women with a special focus on using the health system as an entry point. In Indonesia and Honduras, police and faith-based organizations were trained to respond sensitively to the issue. In various countries, governments drafted and passed national legislation and policies, such as the Domestic Violence Act in Zimbabwe and the National Strategy to Combat Violence Against Women throughout the Life Cycle in Algeria. In Guatemala, much progress was achieved through coordination and synergy between the national and local governments. In Sri Lanka the Government and national NGOs provided gender-responsive psychosocial support for women and communities affected by the tsunami. 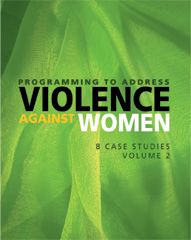 Programming to Address Violence Against Women

Just like your mother? Seven ways motherhood has changed (or not) in the last…