Population Dynamics in the LDCs

EN
The group of least developed countries (LDCs) currently includes 48 countries: 33 from Africa, 14 from Asia and 1 country from Latin America and the Caribbean. Sixteen LDCs are landlocked and 10 are Small Island Developing States.
In 2011, the total LDC population stands at 851million, and is expected to double before 2050. The population of LDCs is presently growing nearly twice as fast (at 2.2 per cent annually) as that of the rest of the developing countries,
which are growing at 1.2 per cent per year. Although the LDCs contain only 12% of the world population, they will account for almost 40% of the global population growth during the next forty years. Fertility decline in the least developed countries
has been markedly slower than in the other developing countries. The total fertility rate in LDCs in 2010-2015 is estimated to be 4.1 children per woman, in contrast to 2.3 for the rest of the developing world. This high fertility is responsible for the elevated rates of population growth in most of the least developed countries. High fertility also imposes a heavy burden in the
health sector, particularly in relation to the need to provide adequate nutrition, immunizations and other health services to the rising number of children. 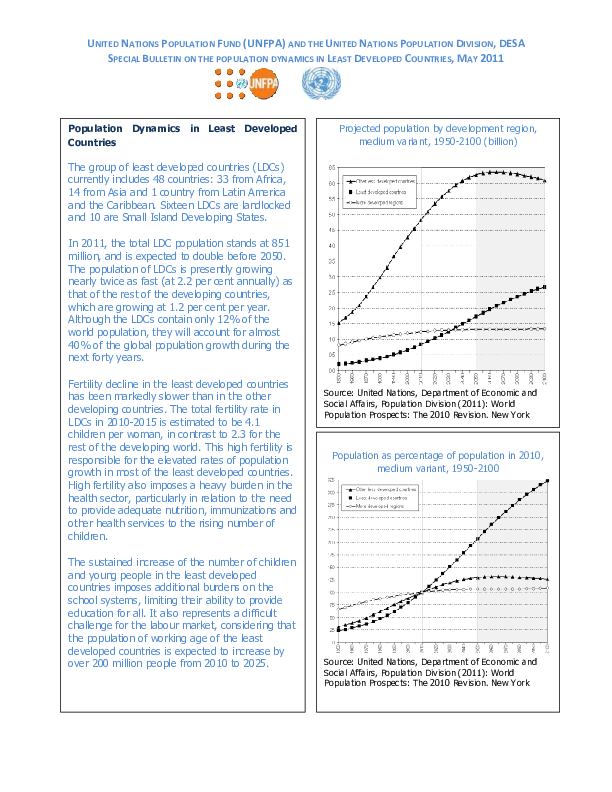