The global Campaign to End Fistula, spearheaded by UNFPA, has delivered significant results in 2008, contributing to broader UNFPA efforts to improve maternal health through support for fistula prevention, treatment and reintegration. This report documents the Campaign’s tremendous growth – from 12 to now 47 countries in Sub-Saharan Africa, Asia and the Arab States region. It assesses achievements and lessons learned both in 2008 and over the course of the Campaign.

The report shows that the scale of programming within Campaign-supported countries has expanded. At of the close of 2008, the majority of countries reported full programme implementation phase. In 2008, 4,000 women received fistula treatment with support from UNFPA and more than 2,000 health personnel received training in fistula management and care. As part of Campaign efforts to promote national leadership, to date 28 countries have integrated fistula in relevant national policies and plans. Thirteen Campaign countries are now supporting fistula survivors to engage in community and national level advocacy through which they sensitize communities, provide peer support, and advocate for maternal health. Also in 2008, the Campaign was honoured by United Nations Development Programme as an excellent model for South-South cooperation and human development across borders. 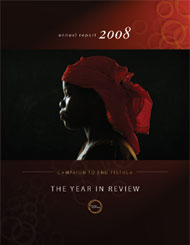