• Girls are less likely than boys to complete schooling and more likely to face forced marriage, child labour, female genital mutilation and other undermining practices.
• More than half of the world’s 60 million 10-year-old girls live in the 48 countries with the worst gender inequality.
• $21 billion a year dividend for developing countries can be unlocked if all 10-year-old girls complete secondary education.

Practices that harm girls and violate their human rights--starting at age 10--prevent them from realizing their full potential as adults and from contributing to the economic and social progress of their communities and nations. Without their contribution, the United Nations Agenda 2030 for Sustainable Development and its accompanying 17 Sustainable Development Goals may never be achieved.

Ten is a pivotal age for girls everywhere, as puberty approaches. In some parts of the world, a girl at this age enjoys limitless possibilities and begins making choices that will influence her education and, later, her work life. But in other parts, a girl who goes through puberty is suddenly seen as a commodity that may be bought, sold or traded, the UNFPA report shows. She may be forced to marry, pulled out of school and expected to start bearing children and begin a lifetime of servitude.

“Impeding a girl’s safe, healthy path through adolescence to a productive and autonomous adulthood is a violation of her rights,” UNFPA Executive Director Dr. Babatunde Osotimehin says. “But it also takes a toll on her community and nation. Whenever a girl’s potential goes unrealized, we all lose.”

The new development agenda, endorsed by world leaders in 2015, is the blueprint for countries’ social and economic progress for 15 years. It aims for equitable development that leaves no one behind. Removing the barriers that hold 10-year-old girls back today will increase the chances that the agenda will be a success, the report argues.

The State of World Population report notes that of the 125 million 10-year-olds today, 60 million are girls who are systematically disadvantaged at the global level as they move through adolescence into adulthood. Girls are less likely than boys to complete formal schooling at the secondary and university levels, are more likely to be in poorer physical and mental health, and will find it harder to get paid jobs.

The range of proven policy options available to governments has grown over the past decade. These include banning harmful practices, such as child marriage and providing cash transfers to parents of girls in poor households to help defray costs of schooling, and, thus keep girls in school longer. They also include providing life-skills training and age-appropriate comprehensive sexuality education to girls approaching puberty.

The challenge now, UNFPA’s State of World Population report says, is to scale up these interventions to reach more girls, especially the poorest and most vulnerable, by age 10.

“How we invest in and support 10-year-old girls today will determine what our world will look like in 2030,” Dr. Osotimehin says. “With support from family, community and nation, and the full realization of her rights, a 10-year-old girl can thrive and help bring about the future we all want.”

• Nine out of 10 10-year-old girls live in developing countries, and one in five lives in a least developed country: one in five is in India, and one in eight in China.
• Each year of education delivers an additional 11.7 per cent uplift in wages in later life for girls (compared with 9.6 per cent for men). Yet, 16 million girls between 6 and 11 will never start school, twice the number of boys.
• If all the 10-year-old girls who drop out of school or do not attend school in developing countries completed secondary education, they would trigger a $21 billion annual dividend.
• Ten per cent of 5-to-14 year-old girls do more than 28 hours of household chores per week, twice that of boys. Three in four girl labourers are unpaid.
• Every day, an estimated 47,700 girls are married before 18. 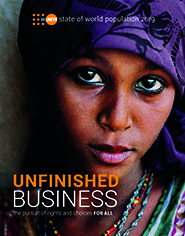 Vast numbers of women lack decision-making power over their own bodies, says…