Countries where HIV is still relatively rare have a window of opportunity to avoid more serious epidemics, cost-effectively. But it is essential that they invest in targeted prevention efforts, and actively counter the stigma of HIV and the taboos that hinder addressing risky behaviours.

This was the conclusion of the First Asia-Pacific Regional Conference on Universal Access to HIV Prevention, Treatment, Care and Support in Low Prevalence Countries, where experts from governments, civil society and international organizations shared experiences and strategies for strengthening national AIDS programmes. Delegates adopted the Ulaanbaatar 2006 Call for Action, highlighting the priorities of an effective response to the epidemic. 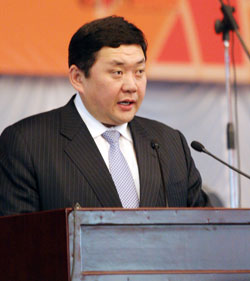 Opening the conference, Prime Minister Enkhbold Miyegombo announced that Mongolia had re-established its national AIDS committee, and pledged to step up action against HIV. “I believe that the low prevalence of HIV is not a reason to limit the allocation of domestic and international financial resources to HIV prevention,” he stated. 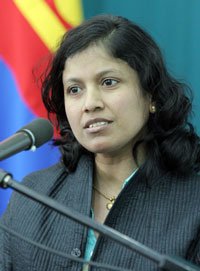 “Whether a country is low prevalence or high prevalence, the risk factors are the same, and HIV prevention efforts need to be focused to be most effective,” said J.V.R. Prasada Rao, Director of the UNAIDS Regional Support Team for Asia and the Pacific.

Participants agreed that targeted HIV prevention efforts should focus on people most at risk of acquiring HIV within the countries, including sex workers and their clients, injecting drug users, men who have sex with men and young migrants. Efforts should also be made to raise general awareness about AIDS to help break down AIDS-related stigma and discrimination. Despite a few notable successes in containing the epidemic, infections continue to rise throughout Asia and the Pacific region and have reached concentrated levels in a number of countries.

They noted that discrimination against people most at risk and people living with HIV impedes efforts to scale up prevention, treatment, care and support services.

“Denial, stigma, discrimination and criminalization of people most at risk of HIV must be addressed by reforming laws and aligning them with national AIDS policies,” said Ts. Purevjav, Executive Director of the Positive Life Centre, a Mongolian non-governmental organization.

The Call for Action urges countries to improve surveillance systems, so they can better understand factors driving the epidemic and target interventions to those most at risk. National AIDS action plans, it states, need adequate funding, ambitious but realistic targets, high-level political commitment, and the full involvement of civil society. It calls on governments and international donors to increase support for national HIV prevention programmes.

Under the theme ‘’Low to zero’, the conference involved countries that have overall HIV prevalence below 0.1 per cent and do not have significant infection rates among subpopulations. Participants recommended against using the term “low prevalence”, saying it could lead to a diversion of attention and resources from the HIV epidemic.

In subregional working groups, delegations examined the situations in individual countries, identifying obstacles to and opportunities for scaling up national HIV prevention, treatment, care and support efforts, as called for by the United Nations 2006 High-Level Meeting on AIDS in June.