BANGKOK—“Quality reproductive health care saves lives, and reduces poverty,” lawmakers from 103 countries agreed today, pledging to step up efforts to ensure that everyone has access to family planning, services for safe pregnancy and childbirth, and the means to prevent sexually transmitted diseases including HIV.

The third global parliamentarians’ conference on population and development reaffirmed that 10 per cent of national development budgets and development assistance should be devoted to sexual and reproductive health. Greater investment in this area is essential, participants agreed, if countries are to meet the Millennium Development Goals (MDGs) for 2015, including sharp reductions in poverty, maternal deaths and HIV infections.

Some 180 legislators and ministers attended the two-day meeting, organized by the Asian Forum of Parliamentarians on Population and Development (AFPPD) and UNFPA, the United Nations Population Fund. Regional parliamentary groups from Africa, Arab States, Asia and the Pacific, Europe and the Americas took part, along with Parliamentarians for Global Action, a global organization with a focus on population.

The UN Economic and Social Commission for Asia and the Pacific (ESCAP) and the Thai National Assembly hosted the gathering at the UN Conference Centre. 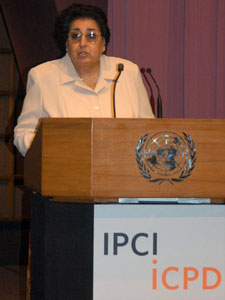 “As parliamentarians, you can transform the voices of the people into action by governments. You have the power to make a real difference,” UNFPA Executive Director Thoraya Ahmed Obaid told the assembly in the first day’s plenary session.

The meeting reviewed progress towards universal access to reproductive health care, the goal for 2015 adopted by the International Conference on Population and Development (ICPD) in 1994. Lawmakers from the various regions shared experiences and developed action plans for increasing political and financial backing for this effort.

Participants unanimously adopted a Bangkok Statement of Commitment reaffirming their support of the ICPD Programme of Action and its “indispensable role” in achieving the MDGs.

The document notes that to gain greater policy, legislative and financial support, parliamentarians must convey simply the urgent need for action to reduce maternal deaths, meet unmet demand for contraception, and prevent sexually transmitted infection including HIV. Such action must be integrated into national development strategies, backed by laws that are fully implemented, and supported by coalitions that include legislators, officials and community groups.

Gill Greer, Director-General of the International Planned Parenthood Federation, detailed the terrible death toll due to inadequate maternal health care, unsafe abortion and a lack of HIV prevention services. “No one should die as a result of sex, denial of accurate information or the lack of a condom, or a simple birthing kit,” she said.

The results of a survey of 322 parliamentarians from 104 countries were presented to the meeting. It found that many countries have adopted policies and laws on gender equality, reproductive rights and gender-based violence. At the same time, it showed that enacting HIV/AIDS-related legislation and ensuring funding for reproductive health continue to be challenges.

The Third International Parliamentarians’ Conference on the Implementation of the ICPD Programme of Action (IPCI/ICPD) was preceded by global conferences in Strasbourg in 2004 and Ottawa in 2002.

The United Nations Population Fund is an international development agency that promotes the right of every woman, man and child to enjoy a life of health and equal opportunity. UNFPA supports countries in using population data for policies and programmes to reduce poverty and to ensure that every pregnancy is wanted, every birth is safe, every young person is free of HIV/AIDS, and every girl and woman is treated with dignity and respect.