BOUAKE, Côte d’Ivoire — Eighteen-year-old Beatrice Kouado is bent over her paper pattern in concentration, painstakingly guiding the yellow thread back and forth in regular, even stitches as she learns the art of tailoring.

“This training will assure my future – for myself and my family,” says Beatrice, her pink butterfly earrings glinting beneath her blue and orange scarf tied over her elaborate ringlets. 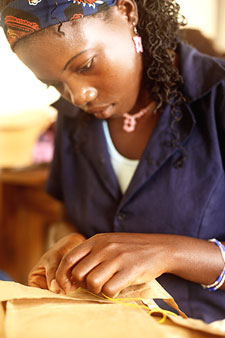 Beatrice was one of the lucky ones selected for the training programme, after her father heard it on the radio.

Beatrice once had hopes of becoming a teacher, but that dream was shattered after her school closed because of the civil war tearing her native Côte d’Ivoire in two. The crisis began in 2002, spurring the displacement of large numbers of people. An analysis undertaken in 2004 found that 61 per cent of those displaced were under 25 years of age.

In the aftermath of conflict

Bouaké, the second largest city in Côte d’Ivoire, was particularly hard hit by the armed conflict. Businesses closed, the educational system shut down as teachers fled the region, health facilities collapsed, and many young people turned to sex work to survive or were the victims of rape or other forms of violence.

“Here in Bouaké there is violence like all over the world. With the conflict, that violence increased,” explains Dr. Ambroise Ané, national programme officer for UNFPA, the United Nations Population Fund, who heads the office in Bouaké. The violence puts young people, in particular, at greater risk.

There have been several months of relative calm in the region, but the city is only now beginning to come back to life. Street vendors, selling everything from used clothes to spare car parts, line the side of the roads as women grill corn to sell to passersby.

But looted, abandoned buildings, pock-marked with bullet holes, are seen everywhere. Their glassless windows stare out forlornly like naked eyes. Peacekeepers and soldiers patrol the streets. And vehicles must pass through a gauntlet of checkpoints to enter the contested city.

As Bouaké attempts to rebuild, UNFPA decided to join with the Ministry of Youth, Sports and Culture to kick off a youth project that provides training for young people, along with sexual and reproductive health services. Of the 73 young people involved in the project in Bouaké, 80 per cent are young mothers, former sex workers or school dropouts. 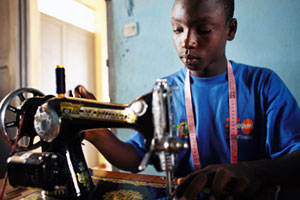 “It’s one thing to ask people to return, but it’s another thing entirely to have them reintegrate and survive,” says the impassioned Dr. Ané. “If they are occupied, especially the girls, they will be able to survive.”

Development of life skills, including ones like assertiveness and negotiation, which can impact sexual and reproductive health, is part of the programme. Contraceptives are available and treatment for sexually transmitted infections is offered.

Walking into the centre’s classrooms, one is greeted by brown paper patterns attached to the bright blue walls from floor to ceiling, wafting gently and hinting at the elaborate clothes they will eventually become. Georges Kouakou-Kouassi has been a tailor since 1988 and today is using his skills to train his young charges at the centre.

Publication: Will you Listen? Young Voices from Conflict Zones

“You can see when they want to learn. It’s important that they love it, and then they will learn,” he says. “I love my career, and I love teaching others. They hope for the future.”

Georges stayed in his father’s house in Bouaké throughout the conflict, because he feared if he left combatants would have looted everything.

“I have hope for Cote d’Ivoire,” he says. “We cannot stay in war. They must come to a consensus and listen to each other for a lasting peace.”

In a back room, girls are busily combing and curling the hair of their fellow students as they learn hairdressing skills. Nineteen-year-old Abiba Dapa is having her purple locks coiffed in the latest flipped style. “I had to stop school, and I needed a trade,” she explains. “Now I want to open a salon.”

Next door, the whirl of pedal-driven sewing machines can be heard. Sixteen-year-old David Kwame Nguessan hunches over his, rhythmically pumping the pedal as he carefully guides along the pair of pants he is making.

The war years were difficult for David and his family. “We had problems with money during the conflict,” he explains shyly. “There wasn’t enough to eat.”

He came to the centre with his mother and eventually garnered a spot in the sewing class.

“With this, I can survive,” David says in his quiet way. “What I learn today, will nourish me tomorrow.”