CAIRO, Egypt – “Your fear is controlling you,” instructor Amany Abdel-Aal told a roomful of women at a Wen-Do self-defence class, held in a cheerfully painted youth centre on the outskirts of Cairo.

The students – most of them Syrian refugees – nodded in agreement.

“Sometimes I want to do something but I can’t,” one woman admitted.

Their fears are well founded. Most of Ms. Abdel-Aal’s students have experienced sexual harassment. And they are not alone.

Sexual harassment takes place in every society on earth – and its costs are immeasurable. It degrades and terrorizes women, keeping them from school and jobs, forcing them to measure the value of opportunities against the risk to their safety. 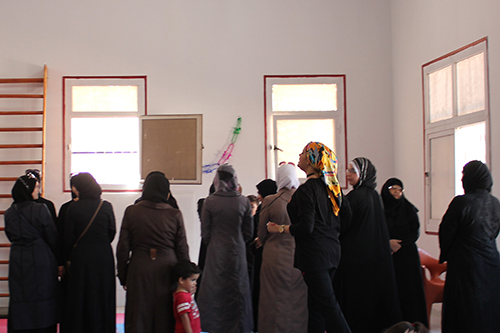 The Wen-Do students are women and girls of all ages. Most have experienced harassment. For modesty reasons, many did not want their faces photographed.  © UNFPA/Rebecca Zerzan

But a global movement is sweeping the world, encouraging women to stand up against these abuses.

Millions of people are airing their own experiences on social media, using the hashtags #MeToo, وانا_كمان#, #BalanceTonPorc, #YoTambién and others. They describe catcalls, lewd gestures, suggestions and assaults. They are demanding change.

Sexual harassment is a major problem in Egypt. Studies show that large majorities of women have been subjected to it, often on the street or public transportation. And the problem is deeply rooted. In one survey , 64 per cent of men admitted to engaging in sexual harassment.

The Wen-Do lessons are conducted by the local organization Etijah, with support from UNFPA and funding from Norway and the European Civil Protection and Humanitarian Aid Operations department (ECHO).

Held in locations identified as “safe spaces” – places where women and girls can speak freely and seek assistance, such as counselling or violence prevention services – the classes are part martial arts lesson, part support group. 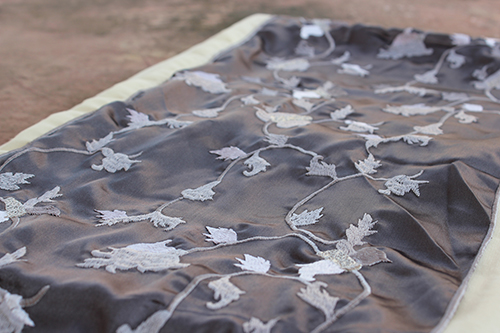 Many Wen-Do students are refugees who have learned to make fabrics, ceramics and other handicrafts. But to make a living with these skills, they must be able to brave the streets and buses. © UNFPA/Rebecca Zerzan

“We don’t only play with physical techniques. Fifty per cent is psychological,” said Ms. Abdel-Aal, a psychologist by training.

At one recent class, the students gathered in a circle, their children playing underfoot, and shared their experiences.

One woman said she had blocked a harasser on Facebook.

Another said she experienced hostility in her daily life: “There are some people we cannot get rid of, but we cannot defend ourselves – bad people.”

Ms. Abdel-Aal encouraged them to be strong: “You can limit their control over your lives.”

The class introduces women to human rights concepts – including the right to live free of violence and abuse.

Such ideas may be new to these students. 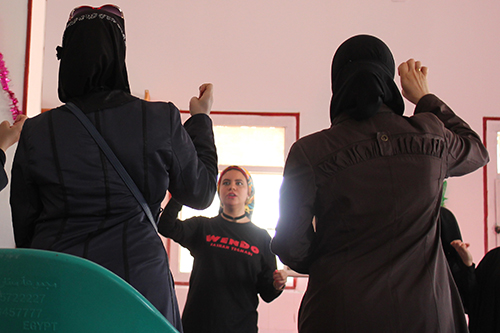 The students learn how to strike an attacker. Other lessons include walking with confidence through a busy street and shouting down harassers. "You shouldn’t be afraid or hesitate. It is your right,” Ms. Abdel-Aal said. © UNFPA/Rebecca Zerzan

And Syrian refugee women may be at even greater risk.

A majority of refugee households in Egypt are considered “severely economically vulnerable.” UNFPA and the Ministry of Youth and Sports offer sewing, cooking and ceramics classes for refugee women, and will soon provide entrepreneurship courses to empower them economically and socially.

But to take advantage of these programmes, they must be able to brave the streets and buses.

“It is your right”

Ms. Abdel-Aal told her students to stand. It was time for exercise.

But before they started punching, she wanted them to practice shouting at an attacker. “What would you say?” Ms. Abdel-Aal asked.

“Behave yourself!” yelled one student.

“You are rude!” another called out.

“You are an animal!” shouted another. The women applauded.

You should not feel ashamed by harassment, the instructor told them. “Your voice is your weapon. You shouldn’t be afraid or hesitate. It is your right.”

The lessons have had a positive impact on her students, Ms. Abdel-Aal later explained. “They become more aware of their boundaries. They take this to their jobs.”

Her students had another way of describing how the class made them feel.

“I have self-confidence,” one woman said, smiling.

Another announced, “I felt I am the queen of the world.” 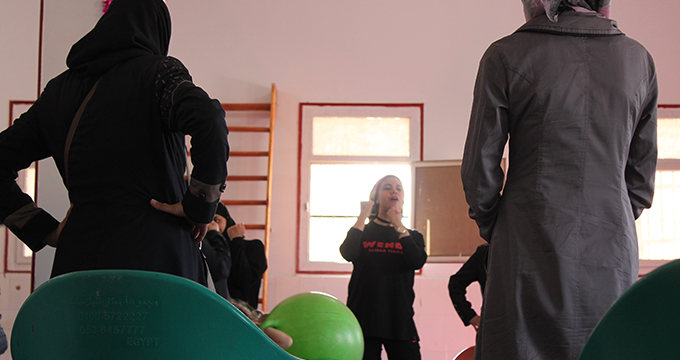