UNITED NATIONS, Geneva – Memory Banda, 23, knows how to change the world: by refusing to stay silent.

Ms. Banda grew up in Malawi in an area where child marriage, sexual violence and early pregnancy were common. “In my childhood, I had seen a lot of girls dropping out of school, getting pregnant, forced into marriages and sexually violated,” she recalled recently in an interview with UNFPA.

The harms of these practices were obvious to her, but she felt alone in recognizing them. “The community did nothing about it, but encouraged girls to accept and be silent.” Sexual initiation camps, she later explained, left girls particularly vulnerable. “In extreme cases, a man who is hired by the community goes through the camp, raping all the girls, and it’s justified as cultural.”

Her own sister was forced to marry the man who impregnated her – at age 11. “This angered me. I felt this is injustice, and it made me to do something about it.”

She began raising her voice, and encouraging others to do the same. Together, they changed attitudes, not only about the age of marriage, but also about the worth of girls and their human rights.

Ms. Banda’s efforts helped to change views – and laws. Her community was the first in Malawi to ban child marriages and sexual initiation camps, and her campaign helped raise the legal minimum age of marriage from 15 to 18 countrywide.

But even more astonishing is the fact that Ms. Banda is not alone.

She is one of a constellation of inspirational young women activists whose efforts are revolutionizing the way the people see women and girls around the world.

“You stand for human rights today and every day,” UNFPA’s Executive Director, Dr. Natalia Kanem, said at the Young Activists Summit in Geneva today, where Ms. Banda and five other activists were celebrated. “And it is your efforts that are helping us to build a more just, a more inclusive, and a more sustainable future. You have proven that, indeed, women are powerful change-makers.”

Ms. Banda’s contributions – both her childhood advocacy and the work of her organization, the Foundation 4 Girls Leadership – were awarded at today’s event.

Alongside Ms. Banda were Nadia Murad, who won last year’s Nobel Peace Prize for her efforts to end sexual violence as a weapon of war; Amy and Ella Meek, sisters who launched a global campaign to end plastic pollution; Hamangai Pataxo, an environmental advocate and defender of the rights of indigenous peoples; and Rebecca Kabuo, a leader in the movement for good governance.

The Youth Activists Summit was held on the International Day of Human Rights, 10 December, which is also the last day of the global campaign 16 Days of Activism Against Gender-Based Violence. The activists spoke about being inspired not only by the horrors of violence, persecution and inequality, but also by the spirit of change they had witnessed in others.

Young people in Iraq, for example, “ignited the spark of change a few weeks ago,” Ms. Murad said at a panel discussion. “They are aspiring to democracy, they are aspiring to enjoy basic human rights even though hundreds of them have been assassinated and injured by extremist groups within Iraq.”

Ms. Banda highlighted the youth she has encountered through UNFPA’s programmes. “I have been inspired by the young people they have profiled and supported in Malawi,” she said. She is now committed to encouraging this new generation of activists. “I have an opportunity to be involved in their work through Girls Empowerment Network, where I have been involved in mentoring and girl empowerment activities.”

The network – supported by UNFPA and the European Union-funded Spotlight Initiative – will “continue creating a chain of empowered, educated girls and change-makers, breaking the cycle of poverty,” Ms. Banda said.

“Global conversations, wisely, often focus on attempts to push back on the rights of women and girls, but this is the encouragement we need to keep pushing forward,” Dr. Kanem said at the awards ceremony today.

“We will not back down. We will not retreat. And we will keep moving forward,” she said.

Ms. Banda echoed those sentiments in her interview with UNFPA. She wants other girls and women to “be brave and be bold for change and believe in themselves… Change is possible, and it begins with action.” 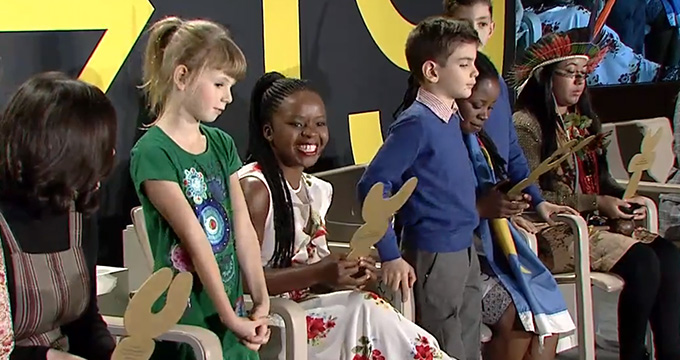