Young people take the lead against Zika in Brazil

BAHIA, Brazil – Young people are taking the lead against Zika in the slums and favelas of Brazil, where poor sanitation has led to a proliferation of mosquito-borne illnesses, including dengue, chikungunya and Zika virus.

"The youth were the first stepping up to screen for the Zika epidemic within our community,” said Mariselma Bonfim, a member of REPROTAI, a youth organization working with UNFPA to disseminate health information in the Salvador suburb of Bahia, one of the states most affected by the Zika outbreak.

On a recent afternoon, a group of REPROTAI members went door-to-door in a congested slum to speak to residents about improving environmental sanitation, part of efforts to reduce mosquito breeding grounds and prevent the spread of disease. 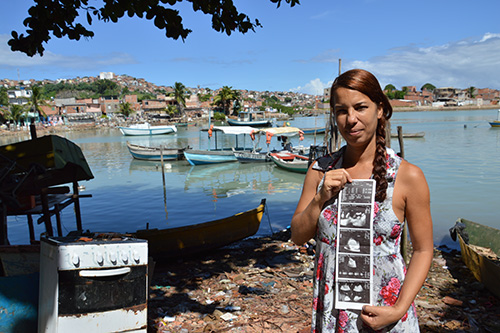 Ferdana Ricardo shows an ultrasound of her daughter, Amanda Vitória, who had Zika-related microcephaly and died within two hours of being born. Now, armed with new information about preventing Zika, Ms. Ricardo is once again pregnant. © UNFPA/Tatiana Almeida

They came across several teenagers splashing around in an open sewer to relieve the heat. The REPROTAI members were dismayed. These are the kinds of conditions – lack of clean water and proximity to stagnant, dirty pools – that have encouraged the spread of disease.

“They went straight to the health district coordinator, and then to the head of the township, where they demanded a solution,” Mariselma said. “Our youth are now leading negotiation meetings to build an effective response to support the community.”

When Zika struck the community, it became clear that irregular water supply was driving the problem. Even solutions to poor water access, like the storage of clean water, have turned out to promote the spread of the disease.

REPROTAI members immediately took action. "They felt uneasy after finding out that Zika wasn’t only connected with the mosquito but with the environment itself,” Mariselma said.

Zika can also be sexually transmitted. After one has become infected, condoms should be used to prevent further spread of the virus.

"We deliver information about Zika virus, basic sanitation, preventive actions and how to stop Zika’s spread in our community,” he said.

“Even I had Zika” 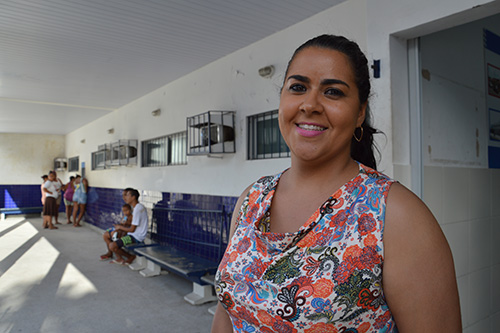 Nurse Jacksonara Cunha, at health facility in Salvador, says, "Women only have the information that the media is giving, which is very vague.” The young members of REPROTAI are stepping up to fill in the gaps. © UNFPA/Tatiana Almeida

“Ninety per cent of Lobato´s residents have been infected with chikungunya and Zika viruses,” said Lea Mendes, in the Lobato neighbourhood of Salvador, where water and sanitation have been problematic. “My whole family was infected. Even I had Zika.”

Community members directed the REPROTAI volunteers to the home of a woman named Fernanda Ricardo. Her child was the first in the community to be born with microcephaly, a devastating complication of Zika infection during pregnancy.

During her pregnancy, Ms. Ricardo, 35, did everything she was supposed to. She took care of herself and received regular prenatal consultations. But one day, she felt something was wrong.

"From the fifth month onwards, all I could feel was pain,” she told UNFPA and REPROTAI. “My baby stopped moving. My belly grew bigger and bigger, and I faced a lot of difficulties. I lost my appetite, had a constant pain on my back and head, and could barely leave the house.”

Ms. Ricardo shared her concerns with her doctor, who determined that the baby’s skull was not developing as expected.

"It was when I looked at my baby that the doctor said she had microcephaly and other malformations,” Ms. Ricardo recounted, tearing up as she spoke. “I couldn´t understand what had happened to her. Her head was smaller. She appeared to have several disabilities, and her heartbeat was very fast."

Her baby, Amanda Vitória, died within two hours of being born. "She didn´t cry. There was a deformation in her face. I put her on my chest and started crying like any mother in my shoes would. After they cleaned her, I calmed down and started caressing and hugging my daughter.”

The tragedy sparked fears in the community, alerting other pregnant women to the risks they face because of poor environmental conditions.

Today, Ms. Ricardo is pregnant again, and expecting a boy. Women seek her out for information about Zika and pregnancy.

"I´ve advised many pregnant women who come to ask what the symptoms look like. They got frightened because of what happened to me," she said.

UNFPA is also working – with the support of partners including the Oswaldo Cruz Foundation, Canadem, UK Aid, the Government of Japan and many local civil society groups – to disseminate information about Zika and to promote sexual and reproductive health and rights.