MANGOCHI, Malawi – Jenipher Sanni dreams of making it big in life, and this year, she prepares to sit for four exams to attain the certificate she needs to move on to university.

But getting to this point has not been a straight shot for Jenipher. At age 21, she has already lived two lives – as a wife and as a student.

When she was 14, she dropped out of school to get married. “In my community,” she said, “getting married at this age is not strange. It is seen as normal.”

As the second wife of a man who already had two children with his first, Jenipher spent a year of her life enduring her husband’s abuse.

In 2010, a community mothers’ group supported by Malawi Girl Guides (MAGGA), a local NGO with funding from UNFPA, intervened to pull her out of this abusive marriage – and got her back into school.

The long road back to school

Jenipher’s return to school was not easy. Getting to Mdinde secondary school – the only one serving her community – meant walking more than two hours each way.

Her performance in class suffered as a result of sheer physical exhaustion. But this did not discourage Jenipher – she persevered in her studies.

In 2015, the UN Foundation, facilitated by UNFPA Malawi, came to Jenipher’s school and provided bicycles to help the girls get to class. For Jenipher, the two-hour walk became a 30-minute ride. Her school performance improved. 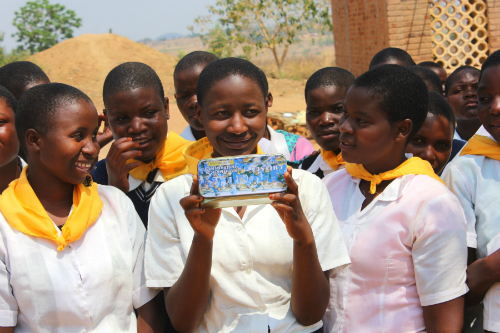 Jenipher back at Mdinde Secondary School, continuing her studies after leaving her marriage. © UNFPA Malawi/Henry Chimbali

Jenipher was one of the first beneficiaries of the United Nations Joint Programme on Adolescent Girls (JPAG), implemented in 2010 in Malawi’s Mangochi and Chikwawa districts with funding from the UN Foundation, and later with support from the Royal Norwegian Embassy in Malawi. JPAG offered mentorship programmes for girls’ participation in leadership, interventions for menstrual hygiene management and gender-based violence prevention and response, and sexual and reproductive health information for adolescent girls.

While the project ended in December 2015, its investments continue to yield returns – in the transformed lives of girls like Jenipher.

A role model for other girls

Now, as she continues her studies at Mawilo secondary school, Jenipher is a leader and advocate among her peers. She talks to them about the effects of child marriage and the importance of staying in school.

Last year, she launched a campaign to buy 1,000 bicycles for schoolgirls in rural Malawi and spoke at the July 2017 Girl-Up Leadership Summit in Washington, D.C., organized by the UN Foundation.

“She is now a mentor for her fellow girls from Mangochi,” said Dorothy Nyasulu, assistant representative of UNFPA Malawi, who accompanied Jenipher to D.C.

“With all these changes in my life, I am considered a role model in my community. I am motivated by that responsibility,” said Jenipher. “I don’t want to disappoint them. I continue to work hard.”

Women and girls with disabilities say WE DECIDE!