HAJJAH, Yemen – Mustafa rushed his pregnant wife to the hospital closest to their remote town in Yemen’s Hajjah Governorate. There, she delivered a girl named Bushra – but the baby was dangerously premature, and there was no incubator available.

The doctors at Al-Mahabisha Hospital referred Bushra to a better-equipped facility in the centre of the governorate. Mustafa rushed her to the referral hospital, driving through pelting rain, but it was no use.

She died on the way. 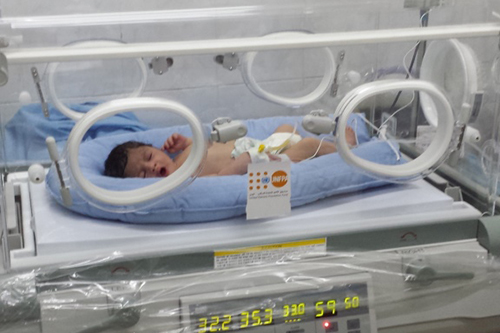 Nafessa was the first baby to be saved by the new incubator at Al-Mahabisha Hospital. © UNFPA

The ongoing conflict in Yemen has resulted in a breakdown of health services. There is a severe shortage of qualified personnel, and health facilities have seen a disruption in the availability of life-saving reproductive health supplies.

By 27 August, at least 160 health facilities across the country had closed, often due to a lack of medicines, equipment and fuel to run generators, according to a recent United Nations report.

With airstrikes and armed clashes ongoing, millions of people are in need of humanitarian assistance. Many have fled to Hajjah Governorate, which currently hosts the highest number of displaced persons – nearly 300,000 people.

The strain on health care in Hajjah is clear.

“All she needed to survive was to be placed in an incubator,” Mustafa said.

UNFPA is working with the Yemeni Family Care Association to respond to these enormous needs, including distributing comprehensive emergency obstetric and newborn care supplies to hospitals in eight governorates.

Delivering this assistance has required overcoming serious logistical hurdles. For a month, for instance, supplies could not be sent through the coastal city Al Hudaydah, where parts of the seaport had been damaged by airstrikes.

“Despite the security situation, despite the fact that most of the roads and bridges have been damaged in the war, and despite the rainy weather this time of the year that worsens our travel, we have been able to deliver in record time,” said Abdullah Al-Haddad, the UNFPA field coordinator in Hajjah.

“I know this area well and how direly they need such health services,” Mr. Al-Haddad said of the women in the districts surrounding Al-Mahabisha Hospital. “Women here are deprived of basic services.”

The facility is now fully operational. 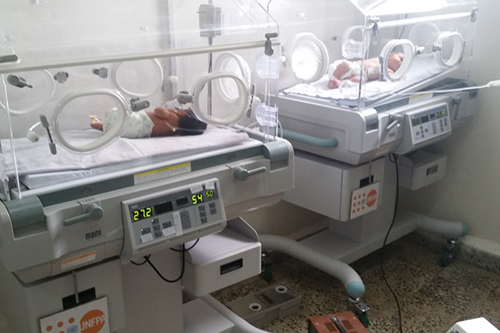 “As we live in wartime, there is a huge shortage in equipment,” said Ahmed Yahya Al-Khazan, the director of Al-Mahabisha. “Bushra was the third case [of neonatal death under the current conditions]. Two similar cases died before they reached the referral hospital,” he noted.

“The assistance just came in time.”

Relief for those in need

Nafessa was the first baby to be placed in the new incubator at Al-Mahabisha Hospital.

“She was in a dire need of the incubator. She was about to face the same fate as Bushra,” said Dr. Al-Khazan.

Nafessa’s father, Na’ef Ahmed, was terrified that he might lose her. He and his wife had been waiting for five years to have a child, he told UNFPA. The new equipment came as a surprise – and a relief.

“My wife was taken to the hospital after two days spent suffering in labour at home. When she arrived, she underwent a Caesarean section. I did not know that the hospital now has an incubator.”

UNFPA is now working to train hospital workers on how to use the new equipment. Hospital staff will also receive training how to address cases of gender-based violence.