Y-PEER (the Youth Peer Education Network) is an umbrella organization for groups that are working to reverse the AIDS pandemic in 22 countries through a wide variety of youth-to-youth projects. Y-PEER links and coordinates these disparate activities and trains young people to be more effective leaders. In late 2006, Y-PEER’s advisory panel met in upstate New York to develop an action plan for the future of their organization.

NEW YORK — On three separate time lines taped to the walls of a conference centre in upstate New York, members of the Global Advisory Panel of Y-PEER wrote down events that had shaped their own lives, the world and the course of the HIV epidemic over the last quarter century. 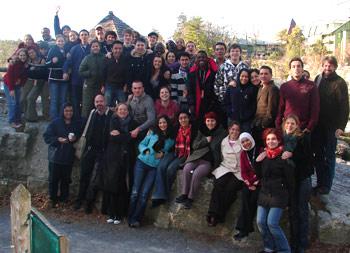 During this exercise, which set the stage for an intensive planning session later in the day, the 28 young people from countries in four different regions – the Arab States, Eastern Europe, Central Asia and East Africa – discovered how much they have in common. The exercise also clarified the degree to which global events had coloured personal histories and given individuals common perspectives despite their varied backgrounds.

“At the end of the day, we are all human beings together, regardless of our diverse cultures and politics,” said Ahmed Malah of Egypt. 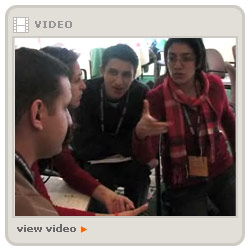 All of the young people in the room were born in the 1980s, before the end of the Cold War. All came of age in the 1990s, just as the AIDS epidemic was surging. All were influenced by major social, economic and political upheavals, including globalization and the rise of the Internet and other electronic communications.

And they all seemed deeply confident of the power of their generation to shape the future. “We are united in trying to find a common way to save the world in such challenging happenings,” said one of the young leaders from the Balkans. “We want to heal some of the divisiveness we see.”

A second exercise took the group on an imaginary trip to 2015, the year that the international community has committed itself to meeting the Millennium Development Goals. They were asked to envision a world in which HIV had been reversed, where men and women were equals, and where stigma and discrimination were things of the past.

How had this been accomplished?

In their imaginations, HIV had been reversed not through some magic medical bullet – a vaccine or a cure – but largely through the power of expanded youth initiatives that had prompted widespread social change.

The confidence the young people displayed during their planning meeting was also evident a couple of days later as the group reported back to Thoraya Ahmed Obaid, Executive Director of UNFPA, the United Nations Populations Fund. Ms. Obaid has been a staunch advocate for giving young people a stronger voice in programming and policy within UNFPA.

As Katya Lukicheva (Kyrgystan) and Ahmed took turns at the microphone reporting on their meeting and outlining their short- and long-term action plans, their polished and strategic presentations belied their youth.

"We regard the meeting as a huge success," said Ahmed. "We shared experiences not only among ourselves, but also with our partner organizations."

Ms. Obaid was clearly impressed. “I think of myself when I was in my early twenties,” she said. “Certainly I could not have given that presentation. I think this generation is much advanced. I believe credit goes to the work you are doing. And I congratulate you on your energy and advocacy." 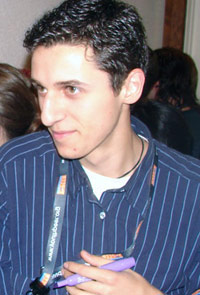 This generation will need all the empowerment it can muster. These young people – part of the largest youth generation in history – are being handed daunting challenges. Those individuals who were selected to come to New York have shown particular promise and have already found ways to shape the world they live in.

All have volunteered extensively in the area of HIV prevention. Several have taken on major projects for their organizations, such as developing websites, translating materials, and managing electronic databases. Some have advocated with decision-makers or media representatives in their own countries. A couple have moved on to professional assignments with UNFPA or partner organizations. In fact, Y-PEER ‘graduates’ were largely responsible for planning, arranging and managing the week-long Y-PEER Global Advisory Meeting.

By offering these young leaders a ladder of skills and opportunities, Y-PEER is doing more than helping individuals improve themselves: It is building the skill sets of talented young people who would otherwise be ‘ageing out’ of the world of peer education. It is carefully constructing the human infrastructure of a social movement to promote sexual and reproductive health and gender equality.

This human infrastructure is one element in a longer term strategy to scale up to the challenge of reversing the spread of HIV by 2015. Already, Y-PEER, pioneered by UNFPA in 2000, has reached 3.6 million young people with messages about sexual reproductive health and HIV prevention. One of its main challenges in moving forward is to reach out beyond mainstream youth to affect the lives of harder-to-reach but more vulnerable young people. 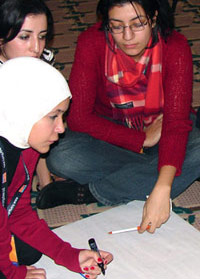 Next year we’re going to focus more strategically on reaching more marginalized populations,” said Dr. Aleksandar Bodiroza who oversees Y-PEER for UNFPA. In the past, he said, the programme had more or less evolved in response to the perceived needs. “So far it has grown as a result of an increased demand and prompt responses to that demand – it’s kind of a new paradigm of expansion from the bottom instead of top-down." But now, he added, Y-PEER has taken on a life of its own.

A major breakthrough, he said, was the alliance forged with MTV’s Staying Alive campaign. With its vast reach, it edgy appeal, its creative public service announcements and its use of celebrity spokesperson, the MTV campaign made the idea of avoiding sexual risks suddenly seem hip and attractive.

“Once MTV, came on board, it became ‘cool’ to be concerned with HIV prevention,” Bodiroza said, noting that in some countries the gender balance of Y-PEER volunteers shifted about the same time Staying Alive was launched. More young men began to see a role for themselves in protecting health, which has sometimes been considered as being within the female domain.

Other keys to Y-PEER’s success in scaling up are:

But perhaps the biggest ingredient in the organization’s success has been its effectiveness in tapping the enthusiasm, the energy, the altruism and the commitment of young people. Members of the advisory board who met in New York are clearly motivated by seeing themselves as being able to make a difference in the lives of others.

“At first, I just wanted something to participate in,” said G?zim Visoka, age 20, who grew up in Kosovo. While war was raging, he was focused on survival. “As things stabilized, I was like a sponge, eager to soak up new experiences and opportunities. Then I began to see this work as crucial – being able to help others at the same time I develop my own skills.” G?zim, who has also been active in scouting and with the Red Cross, now serves as the focal point for Y-PEER network in Kosovo.

“I like thinking that I’m doing something for my community,” said Naida Kucukalic of Bosnia and Herzegovina, who has done educational sessions in refugee camps as well as high schools. “Research in my country shows young people are starting to use condoms more and more and there are less unwanted pregnancies. And as we are getting older, we are moving beyond being peer educators to becoming advocates in our communities.”

“I see people dying every day from AIDS and related diseases,” says Frank Kalabamu, from the United Republic of Tanzania. “But I work with young people for six months and I can see their minds changing.”

“I like to help others, that’s it,” said Milos Stojiljkovic of Serbia, who has worked as a volunteer in many capacities since 1999, and is now training volunteers to reach out to highly vulnerable groups, such as young sex workers, street children and injecting drug users. “When I need help, I would be glad if someone would help me.”