Two years after the first conference in Kampala, Uganda, more than 2,000 experts, first ladies, ministers, decision-makers, donors, researchers, practitioners and advocates are gathering through Dec. 2 to share success stories and ideas and identify key accomplishments and shortcomings. They will also advocate for broad family planning access and support around the world.

The conference is organized by the Bill and Melinda Gates Institute for Population and Reproductive Health at the Johns Hopkins Bloomberg School of Public Health and the Senegalese government in collaboration with, among others, the UN Population Fund, UNFPA.

In his opening speech at the conference, UNFPA Executive Director Dr. Babatunde Osotimehin said the event “is officially about family planning, but it’s also about a larger effort to improve women’s and children’s health. It’s about every woman, every child. It’s about accelerating social and economic progress. And it’s about a new path to sustainable development.”

“Increasing access to voluntary family planning could prevent up to 1 in 3 maternal deaths and 1 in 11 child deaths. This is critical to achieving all the Millennium Development Goals, especially 4 and 5. Every year, 358,000 women die from pregnancy-related complications,” he said.

To respond to the global demand for family planning, Dr. Osotimehin called for galvanizing more political and financial support.

In good timing, the United Kingdom announced on opening day a pledge of about $55 million to UNFPA to enable, among other programmes, a rapid-response unit to supply contraceptives, mostly in sub-Saharan Africa, where shortages are acute. Dr. Osotimehin said the contribution “will go a long way towards saving the lives of women and children, as well as to strengthening health systems and reducing poverty.” 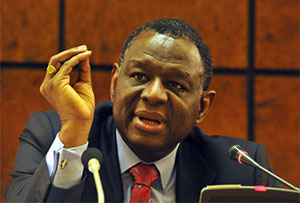 Other speakers at the inaugural ceremony included Dr. Michael Klag, dean of the John Hopkins Bloomberg School of Public Health, Senegalese President Abdoulaye Wade, the First Lady of Burkina Faso, Chantal Campaoré, Stephen O’Brien, under secretary of state for international development in the United Kingdom, and United States Ambassador to Senegal and Guinea-Bissau Lewis A. Lukens.

The four-day event includes more than 140 plenary sessions and panels in which participants will mobilize more financial support for family planning, as well as hold governments accountable for their commitments to these matters.

Worldwide, 215 million women want family planning help but are not getting what they need. Most of them live in the rural areas of sub-Saharan Africa and parts of Southeast Asia, but they are also found in developed countries in these regions.

In Senegal and the rest of West Africa, fertility rates are among the highest in the world, with lack of access to contraception cited as a major contributor to unintended pregnancies, resulting in high maternal and infant mortality in the area. One out of every three women who want to avoid pregnancy cannot because they have little access to family planning information and services.

“At UNFPA, we are determined to address unmet needs for family planning as we strive for universal access to reproductive health,” Dr. Osotomehin said.