DOHUK, Iraq – As violence consumed her home in Aleppo, Ghalia’s parents and brother were killed. Ghalia, now 33, fled to Al-Hasakeh, in north-eastern Syria, to live with her uncle’s family. Amid the chaos of war and displacement, she found an unexpected source of hope: She fell in love.

Months into her new life in Al-Hasakeh, she met an Iraqi man who swept her off her feet. They proceeded with a customary marriage, and she soon became pregnant.

She was able to save a little money from working at a bakery, funds she wanted to put towards her new family. But seven months into their marriage, her husband abandoned her and stole everything – including cherished keepsakes from her late mother.

“I lost everything,” Ghalia said. “My husband not only took my physical belongings, but he also took away the little feeling of stability, safety and happiness I had.”

But that was not all. “I was pregnant when he left me,” Ghalia told UNFPA. “His actions took a toll on my health and I lost the baby. Everything went downhill.”

Today is World Refugee Day, a day to stand with refugees, recognize their hardships and commemorate their strength.

Today, a record 68.5 million people have been forcibly displaced from their homes. That is 31 people newly displaced every minute, according to a new report from the UN Refugee Agency. Some 25.4 million of the displaced are refugees – people forced to cross international borders in search of safety.

Uprooted from their lives and communities, they endure not only the threats of conflict or persecution, but also risk poverty, exploitation and abuse. As they seek safe haven, they may be turned away, detained or worse.

When Ghalia’s husband took everything, there was nothing she could do. “I couldn’t go to court to get my rights, given that I had no legal document supporting my story,” she said.

To make matters worse, she was uprooted yet again. Hostilities broke out in Al-Hasakeh, forcing her to flee with her uncle’s family to Domiz 2 camp in the Duhok Governorate of Iraq.

After losing her husband, her pregnancy and her new home, Ghalia suffered a nervous breakdown. She attempted suicide more than once.

Then Ghalia’s uncle’s wife learned about a women’s centre in the camp, a UNFPA-supported safe space for women and girls that offers counselling, psychosocial support, life-skills workshops, recreational activities, and informational sessions on issues including health and human rights.

Social workers at the women’s centre sought out Ghalia and listened to her story.

“It took a while for me to trust the social workers,” Ghalia explained. “I only attended the first meeting because my uncle’s wife pushed me to.”

But over time, the counselling began to help.

“A few sessions later, I saw empathy and support from the social workers. They started giving me advice on how to act and how to think when I feel like I am heading to a dark place in my mind. They told me that I wasn’t the only one who was feeling this way; I didn’t believe them at first.”

Ghalia started to explore the opportunities available at the women’s centre, including the information sessions and classes. There, she met other women who had survived their own ordeals.

“I started developing a sense of belonging. I stopped feeling alone and started enjoying the company of the girls, especially when we opened up and I discovered that they, too, have stories similar to mine.”

She now works as a volunteer in centre, helping other women overcome their own traumas and hardships.

“I get to tell my story, talk about my depression to those who are going through a rough patch, and share my lessons learned from this experience, with the hope that it can give them a sense of relief,” she said.

There are over 10,000 people living in the Domiz 2 camp, including nearly 8,700 Syrian refugees. To meet their needs, UNFPA is supporting the women’s centre, as well as a maternity unit, a reproductive health clinic and a youth centre. 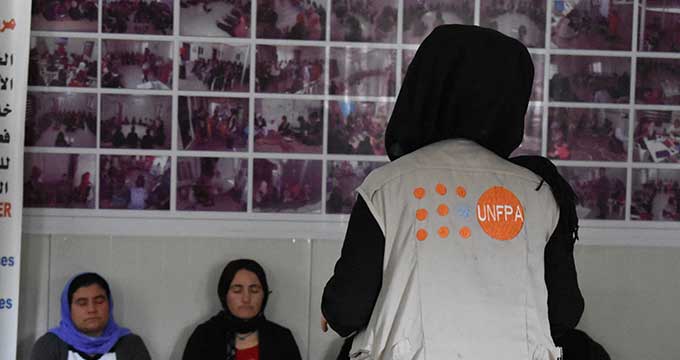