In the Gambella Region of Ethiopa, a new world record was set for the most people being tested for HIV during an eight-hour period. The initiative brought together 3,383 people to receive HIV counselling and testing at the Gambella Stadium. Three representatives of the Guinness Book of World Records were present to record the event.

Meanwhile, in Botswana, South Africa and Tanzania, the world record was broken for the most people being tested for HIV at multiple locations in eight hours. A total of 4,367 people received HIV counselling and testing in designated locations in those countries within the same eight-hour time frame.

Both new records are now listed on the website of the Guinness Book of World Records.

The events were designed to increase public awareness about HIV prevention, and to promote testing and treatment in vulnerable communities. Condoms, information and festivities were provided by the UNFPA-supported campaign CONDOMIZE! 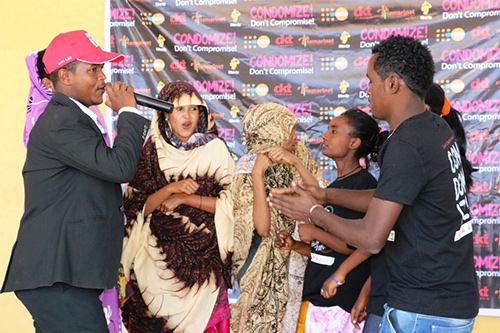 A musical performance by a youth group at a CONDOMIZE! event in Jiggiga, in the Somali Region of Ethiopia. © UNFPA Ethiopia

Most HIV testing in eight hours in a single location

The record-breaking initiative in Ethiopia was led by the Government of Ethiopia and UNAIDS, with support from UNFPA.

Gambella Region was chosen to host the event because it has an HIV prevalence of 6.5 per cent, according to the most recent demographic and health survey – the highest such prevalence in the country, and over four times the national average.

Public enthusiasm for the initiative was overwhelming, helping to drive the enormous turnout and surpass the previous record, held by a mass HIV-testing event in Argentina in 2012.

An overwhelming majority of the participants were young people. Ethiopian Minister of Health Keseteberhan Admasu and the President of the Gambella Region also took part in the event.

New HIV infections in Ethiopia have declined by 90 per cent over the past decade, said the health minister. “If we can keep this momentum, we can manage to stop AIDS well before 2030,” he said.

Ethiopia’s HIV testing and counselling campaign aims to reach 100,000 people over the course of a year.

Most HIV testing in eight hours in multiple locations

The multiple-location initiative was a collaboration between the governments of Botswana, South Africa and Tanzania, as well as UNAIDS and the World Health Organization, with support from UNFPA.

Through an event held in the northern town of Maun, Botswana contributed the largest number of participants to the effort, reaching 2,419 people with HIV counselling and testing.

The CONDOMIZE! campaign drew and entertained crowds for both of these record-shattering initiatives, which were held at the end of November to commemorate World AIDS Day.

At the event in Maun, Botswana, 16,000 male condoms and 5,000 female condoms were distributed during the eight-hour period. In Ethiopia, CONDOMIZE! brought popular singers to entertain participants in Gambella Stadium, and also offered a forum to answer questions about condom use and HIV prevention.

These events were an important opportunity to dispel rumours about HIV, particularly among vulnerable communities. Soon after the record-breaking initiatives, an HIV Prevention Summit was held in Ethiopia’s Somali Region, the only region in the country where HIV rates are increasing, particularly among young people. CONDOMIZE! activities at the summit revealed that misconceptions about the spread of HIV remain widespread and discussion of condoms is considered close to taboo.

CONDOMIZE! is working to reduce stigma about condoms and to promote access to condoms, education and information about HIV prevention. Condom promotion and HIV counselling and testing are crucial components of the global effort to end the HIV epidemic.

Fighting the stigma of living with HIV in Sri Lanka