LOVUA, Angola – In a simple white tent in the Lóvua refugee settlement in Angola, women and girls who fled the brutal conflict in Kasai, in the Democratic Republic of the Congo, can find safe haven and support.

The tent is one of two women-friendly spaces UNFPA has established in the settlement. These spaces offer women and girls a safe place to talk, receive information and participate in recreational activities.

“When I take part in the activities here, I forget my worries and all my memories from Congo for a while,” said 17-year-old Musito.

Musito is one of 35,000 Kasai refugees to escape to Angola’s Lunda Norte Province. 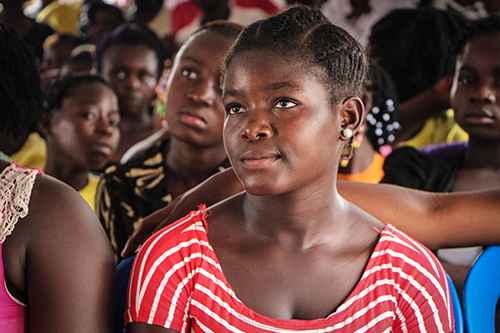 She fled the conflict in April when armed men arrived in her village. “When we went out, we found five decapitated bodies in front of our house,” she recalled.

“We fled as fast as we could, with only our clothes on our backs.” She arrived at the Angolan border the same day, together with her parents and siblings.

The horrors that refugees have experienced are extreme.

Many saw their family members killed, witnessed decapitations or mutilations, or had their property burned. Rape has also been widely reported.

But refugees’ vulnerability does not end after they leave the conflict area. Risks to women and girls escalate during humanitarian crises – even in refugee camps and settlements – as social safety nets and protection mechanisms break down.

Experts say there have been reports of gender-based violence among the refugees in Angola.

“The number of cases of sexual and gender-based violence is very worrying, and we fear this is only the tip of the iceberg, as many cases are never reported,” said Florbela Fernandes, UNFPA’s representative in Angola. 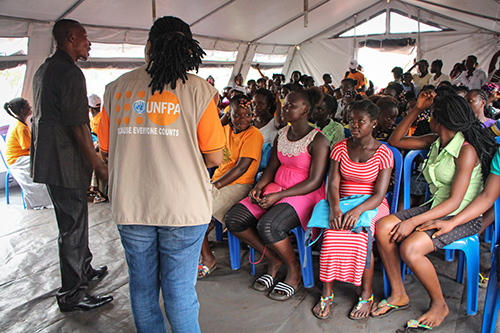 “This violence jeopardizes women’s health and rights, and there is a need to strengthen both the preventative work and the capacity to meet the needs of survivors,” she added.

A space for learning, playing

In Lovua, a settlement some 100 kilometers from the border, 15 refugees have been hired and trained as social mobilizers, who bring women and youth to the space and provide them with services.

“At this place, there are many women with a lot of worries,” said Monique Kapinga, 31, one of the mobilizers.

She and her colleagues offer information sessions about sexual and reproductive health, and refer refugees to medical services when needed. The mobilizers also raise awareness of refugees’ human right to live free of violence, and help connect survivors of gender-based violence to supportive services.

There are also educational and recreational activities.

In the tent on one recent Saturday, Musito and some 80 other adolescents were dancing and performing in skits. Once a week the tent is dedicated to activities for adolescent girls, a group often neglected in humanitarian emergencies.

“I am glad to be able to take part in some activities. There is not much to do in the settlement,” Musito said. 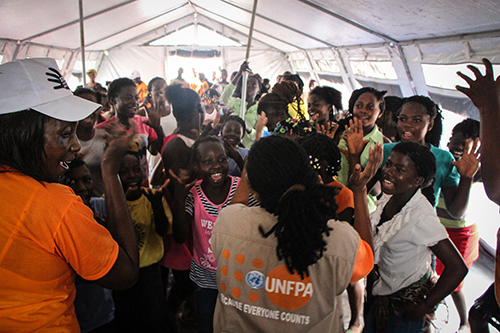 “I attend some Portuguese courses,” Kiena Odette, 18, explained. “Apart from that, there is not much to do here.”

Approximately 2,000 women and girls have been reached by the women-friendly spaces and social mobilization efforts in Lóvua.

UNFPA is also supporting the provincial Department of Health, training nurses and other health workers to sensitively treat survivors of sexual and gender-based violence and provide reproductive health care.

Humanitarian responders say they are worried about women’s and girls’ vulnerability to violence and exploitation. There are also concerns about child marriage – which was widespread even before the crisis – become a coping mechanism among increasingly vulnerable families.

“There is a need for more dedicated activities for youth in the settlement, to prevent youth from falling into drugs or transactional sex, and to combat child marriages,” said Ms. Fernandes.