JUBA, South Sudan – “I never felt so empty and helpless,” Tabitha* told UNFPA. She is one of at least a hundred civilians to be sexually assaulted in the wake of South Sudan’s most recent hostilities.

Since the eruption of violence last month, the United Nations Mission in South Sudan (UNMISS) has documented over 100 separate cases of sexual violence, including gang rape and the sexual abuse of minors. Others say the numbers are much higher. UNMISS has described the incidents as “unspeakable acts of violence against civilians,” which may amount to war crimes.

UNFPA is coordinating the response to the ongoing sexual violence, including supporting a referral system that helps direct survivors to post-rape medical care and psychological first aid.

Tabitha, an educated woman in her 20s, thought she was finally safe.

When the fighting broke out, she and her mother had taken shelter in a church. After four days of incessant gunfire, silence fell around them, and word arrived that the armed parties had called for a ceasefire.

Still, she stayed in the church for two more days. But slowly, as the city returned to life, people began to return to their homes. Others took the opportunity to flee.

She and her mother planned to leave the country. But without money, they would not get far. Tabitha decided to quickly return home for some travel documents and a stash of jewellery. 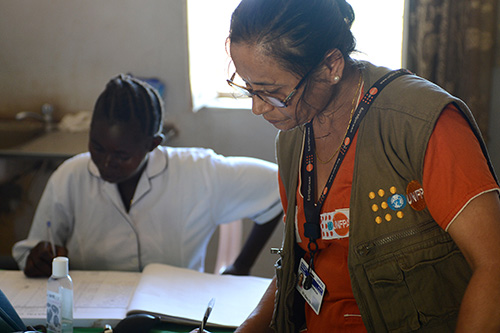 Midwives have been trained to provide sensitive and comprehensive care to survivors of sexual violence. © UNFPA/Tim McKulka

She was relieved to see that some of her neighbours had also returned, and that her home had not been ransacked. But as she packed her suitcase, she heard screaming. She looked out the front door and saw two women being chased by five men.

“I saw them heading straight to our house,” she later recounted.

She tried to lock the door, but it was too late.

“One of the men forced it open and hit me hard on the face with a pistol. Suddenly his dirty hands were all over me, pinning me down and ripping off my clothes, shouting, ‘Stop fighting or I will shoot you!’ The next minutes played out like hours…The pain was so much I blacked out.”

Tabitha awoke in agony. She and the other women had been gang-raped.

They were left not only with pain and fear but also shame. In South Sudan, rape survivors often endure enormous stigma; many are blamed for being assaulted.

“I was so consumed with guilt and humiliation, I was not sure I could step outside, feeling that people would know what had happened to us in broad daylight,” Tabitha recounted.

I was more worried of pain and shame, but the doctor made me realize survivors like me needed much more.

But one of the other women – an elderly neighbour – insisted that they leave right away. She said it was common for vulnerable people to be targeted repeatedly.

Tabitha’s mother recognized immediately that something was wrong. She brought Tabitha to the nearest hospital, where a midwife and doctor tended to her.

“I was more worried of pain and shame, but the doctor made me realize survivors like me needed much more,” Tabitha said.

UNFPA is working to ensure survivors of sexual assault receive comprehensive, effective, compassionate and confidential care. The Fund has provided emergency reproductive health kits to partner organizations providing post-rape care in about 15 health facilities around the country, and aims to increase this to 24 facilities over the next year.

With funds from Canada and Sweden, UNFPA has incorporated the clinical management of rape into South Sudan’s midwifery curriculum, and has deployed 45 midwives, who are able to provide sensitive post-trauma care, throughout the country.

A system to refer survivors to medical and psychological care has been established in areas with high concentrations of displaced civilians, and UNFPA is also increasing its outreach in communities, encouraging survivors to seek support services.

UNFPA has also distributed over 7,000 dignity kits to vulnerable women and girls. These kits contain sanitary napkins, soap, underwear and a flashlight.

Tabitha returned to the church hoping to encourage the other women to receive care.

“It was unfortunate,” she said. “I found the other two survivors had shifted to an unknown location by the time I returned to the camp.”

Today, Tabitha is living as a refugee outside of South Sudan. She is continuing to take her post-exposure medication to prevent HIV, and has been encouraged by a UNFPA midwife to seek further counselling if she feels the need for more support.

*Not a real name