Hatidza is a member of the Ahwazis minority group in Iran. She and her brother fled the country after their father was murdered and their family was threatened.

Once they reached Serbia they paid smugglers to take them to Bosnia and Herzegovina. There, they started the dangerous and illegal journey across the border into the European Union.

Out of this number, around 5,000 migrants and refugees are in Bosnia and Herzegovina at any given time. Most are staying in the north-western Una Sana Canton, near the border with Croatia, an EU member state.

Hatidza and her 36-year-old brother are among these travellers. They have been on the move, without a permanent home, for seven months.

And their journey has been harrowing.

Fearing they would be turned away if they used their own identification, they departed Iran without using the proper documentation.

“We had to hide all the time when we saw someone,” Hatidza recalled. “It was about 10 pm. With us was a family with children. This family was Kurdish.”

There were six smugglers and six passengers, split into two inflatable boats, she said.

“It was very scary to be six of us in that small inflatable boat. We had to cross the river between these two countries. Here, the rivers are fast, and I have a phobia of water because I cannot swim. None of us knows how to swim. Maybe the smugglers knew. I don’t know. At one point, the water was coming into the boat, and we had to throw out all the stuff we carried to not sink.”

Many migrants and refugees have died crossing rivers along the Bosnia and Herzegovina border, according to news reports.

Biljana Nastovska, a UNFPA expert in dealing with gender-based violence in emergencies, said “this crisis was totally different” from other crisis settings she had seen in Europe.

At the start of the migrant influx, “the camps were established spontaneously in informal settlements,” she said. “The most important thing at that time was just to get people out of the street and get them into collective shelters where they would have access to food, showers.”

The issue of gender-based violence was not prioritized.

Yet women and girls in crisis settings are highly vulnerable to gender-based violence.

By January of this year 2019, UNFPA had opened women’s and girls’ spaces in three reception centres in Una Sana Canton.

The centres offer protection services, such as referrals to shelters for survivors of violence, as well as free legal services and information about human rights and gender equality.

The centres are designed to be culturally sensitive, catering to the wide diversity of visitors, who include migrants from Afghanistan, Eritrea, Iran, Pakistan and Syria. They are able to speak openly and share their experiences.

“We come here freely to talk about different things, to share our secrets,” Hatidza said. “Nobody will say, ‘Don’t say this.’”

It has made a big difference, she said.

“We expect respect. The staff working here treat us with respect. When you see someone treating you with the respect, like a human being, you feel comfortable… Nobody wants to leave their country, their family, their city.”

As spring approaches, a new influx of migrants and refugees is expected. In response, UNFPA is urgently raising resources to continue provide psychosocial support, sexual and reproductive health services, and empowerment programmes in Bosnia and Herzegovina.

And as for Hatidza, she is refusing to let go of her dreams. “Once I get to my final destination,” she told UNFPA, “I hope I will study medicine.” 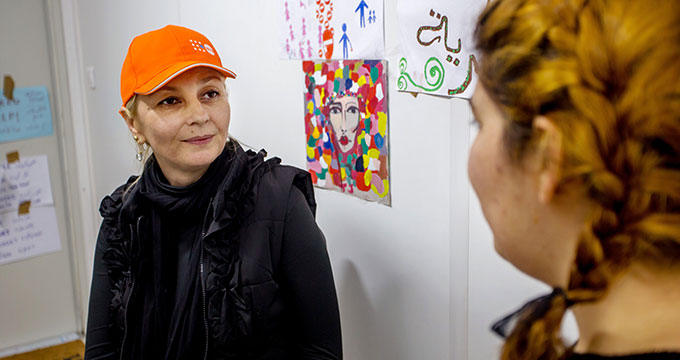