PORT-AU-PRINCE—Dientola Astrel, a pregnant 29-year-old woman, says she was out walking when the devastating earthquake hit Haiti. She hurried home to check on her family and found that her husband had managed to get their nine-year-old daughter out of the house before it collapsed. But the relief was only partial; her mother, brother and sister were missing, and she has not heard from any of them since the disaster struck.

Homeless and anxious about the health of her unborn child as well as her own, she then headed for the Hopital de la Paix in the Delmas neighbourhood—one of the few hospitals in Port-au-Prince which continue to function, though overwhelmed with disaster victims. Dientola has a heart condition and had been told by her doctor to come to the hospital well ahead of the due date. Now, just over 39 weeks pregnant, and spurred on by the quake, she did not waste any time. For the last three days, she has camped out in the hospital’s front yard along with disaster victims and their relatives, waiting to give birth. 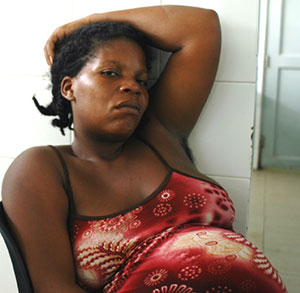 Dientola Astrel, 29, became homeless after the earthquake struck. She is nine months pregnant, has a heart condition and now spends nights sleeping in front of the Hopital de la Paix in Port-au-Prince, waiting to give birth. “I don’t know where else to go”, she said.

Despite her losses and her heart condition, Dientola is among the few, lucky ones to have access to maternal health services in the disaster-stricken Haitian capital. UNFPA, the United Nations Population Fund, estimates that there are 63,000 pregnant women among those directly affected by the earthquake. In the aftermath of disasters, many women have no alternative but to give birth without proper care, often under unsanitary conditions. If complications arise, they can have fatal consequences and add more casualties to an already staggering death toll.

The Fund is now providing supplies for clinical deliveries and emergency obstetric care, as well as hygiene supplies for the affected population.

Almost every imaginable kind of assistance is desperately needed. People are moving about the streets of Port-au-Prince in search of family members, food, water, medical assistance and any help that can be found. The deep blue Caribbean sky and warm sunlight stand in stark contrast to the death and destruction that reign across this devastated city. Many people are wearing masks or pieces of cloth to cover their noses and mouths to protect themselves from the smell of decaying corpses.

Assistance is now pouring in and relief efforts are getting better organized almost by the hour, but no one believes there will be a quick solution to all of the effects of this earthquake’s massive devastation. Its scale is far beyond what has been seen for a long time.