Volunteers in Guinea Reach Out to Neighbours in Need

N’ZÉRÉKORÉ, Guinea — It is eight in the morning, a few hours before the sun peaks over southeastern Guinea. Uniformed schoolchildren hurry out onto dirt roads, creating a patchwork of gingham across the city’s awakening streets. Passengers climb onto idling moped taxis, balancing briefcases or buckets as they head off to work. And just off the major market street, tucked away behind a thicket of lush forest scrub, a petite woman surveys the steep and unkempt path ahead of her. Out on the road, agile motorbikes traverse much of N’zérékoré’s difficult terrain. But here, not even they can pass. The woman, Charlotte Lamah, simply presses forward up the abrupt slope. 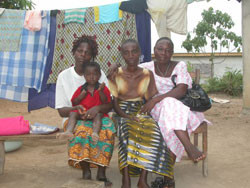 Charlotte Lamah, far right, with one of the families she visits. Photo: Kathleen S. White

On the other end of the path, neighbours eagerly await her comforting presence as much as the medical and food aid she supplies. Asked why she volunteers to help people living with AIDS in her neighbourhood, Ms. Lamah shrugs humbly. “It’s the same as it was for our parents,” she explains. “We are Guineans. When someone is ill we must help them.”

Lamah’s words are something of a national refrain, a scaled-down version of the care Guinea has given neighbouring countries over the past decade. With Liberia to the south, Sierra Leone to the north, and Côte d’Ivoire to the east, Guinea’s forest region is a landlocked peninsula in a sea of regional instability.

For the better part of two decades, Guinea’s forest region has absorbed massive influxes of displaced people. Several hundred thousand refugees crossed into the area during civil war and unrest in Liberia, Sierra Leone and Côte d’Ivoire. At the peak of the influx, refugees comprised half of the population in the area surrounding N’zérékoré, according to the United Nations Joint Programme based here.

" We are Guineans. When someone is ill we must help them. "

Host communities do not always welcome the presence of refugees, and conflict has occasionally erupted. But the departure of refugees is not always wholly beneficial either. “Agencies turned their attention to refugees further away,” says Antoine Sandy, Director of Hope for a Healthy Life (EVSG), the project for which Ms. Lamah volunteers.

After years of sharing land and scarce resources with others in need, many residents of N’zérékoré are now in need of assistance themselves. “We need ambulances, radios and communication, gasoline, medicines,” lists Dr. Kalifa Bangoura, the government’s Regional Director of Health. Sitting at his desk, his face is slightly cast in shadow. He half-chuckles, gesturing at the darkness. “Even my generator doesn’t work. There’s no petrol to run it.” 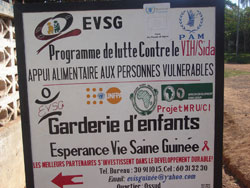 Because the borders here are so porous, certain public health issues – AIDS in particular -- have become a regional priority. At 1.7 per cent, N’zérékoré’s HIV prevalence is slightly higher than the national average. Infection rates in Côte d’Ivoire, Liberia and Sierra Leone are several times higher. But health workers in Guinea warn that the statistic gives an incomplete picture.

“Even though the figure is low in comparison, it could very easily explode,” says Gedéon Behigium, Team Leader of the UN Joint Programme in N’zérékoré.

AIDS-related deaths in N’zérékoré could increase, in part because the terrain that has sheltered so many is, ironically, an unforgiving host.

“There are no roads,” Behigium says. “There is no electricity. It’s a huge obstacle for development generally.”

The region’s needs are basic but critical. Dr. Nouhan Traoré, an AIDS specialist at UNFPA, the United Nations Population Fund, explains that a few key contributions would have enormous impact. “We need a radio and at the very least two ambulances for our prefecture,” he says. “These are not unreachable goals.” But without these resources, critical time is lost during medical emergencies – there is no means to contact doctors, let alone deliver care in timely manner. 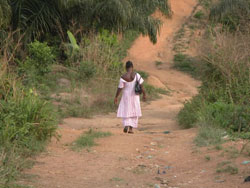 EVSG developed its door-to-door approach to bring hard-to-reach medical services to the doorsteps of those who need them most. On foot, often in searing heat, some thirty volunteer community agents visit ten homes each, two days a week. With the help of funding and materials from a cross-border initiative managed by UNFPA, called the Mano River Union and Côte d’Ivoire STI/HIV/AIDS Project, EVSG’s work has grown enormously. Where it once assisted 11 infected persons, it now reaches out to 350.

Still, the door-to-door approach cannot resolve every logistical challenge in N'zérékoré. Poor roads cause significant delays in the delivery of health services, whether over long or short distances. Furthermore, soaring gas prices have caused some truck drivers to scrimp -- and as a result, lorries often break down along the roads to town. Drivers wait hours for assistance, while their cargo of medication, food or materials for industries languishes in the sun.

Given the transport challenges, it is not unusual for Lamah to find her families dangerously low on medication. On this morning, she arrives at the home of a young woman named Genevieve, who cannot walk very far and relies on Lamah to bring her medicines. Gently lowering her delicate frame into a chair, Genevieve holds up a plastic medication bottle, letting the two remaining pills rattle hollowly inside. It is enough medication for just one day. “This is all I have left,” she says.

Lamah explains that EVSG is still waiting for the medicines to arrive from another city. “I have to go empty-handed,” she says with frustration. “Above all, when you see someone who’s really struggling and you have no means to assist – that’s what is hard.”