SANA’A, Yemen – The conflict in Yemen has been catastrophic for its civilian population. Thousands have been killed and over 12 million people are now targeted for humanitarian assistance. Many have been pushed into grinding poverty. Under these strains, women are more vulnerable than ever to violence and exploitation.

“The war and its ramifications have impacted all, at all levels, including their personal lives and relations,” said the director of a UNFPA-supported women’s shelter. “We have noticed that domestic violence has increased and the divorce rate is on rise.”

Even before the conflict erupted, gender-based violence was widespread. Some 92 per cent of women said that violence against women was common in the home, according to a 2013 survey. 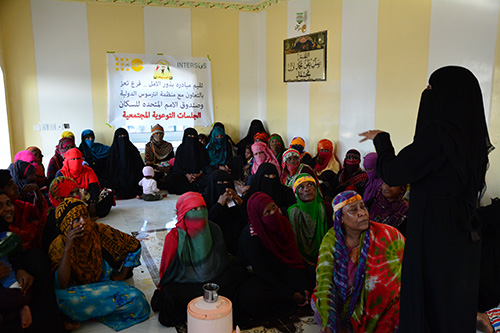 Women like Ameera have never known a life without violence. Women in Taizz attend a UNFPA awareness-raising session about gender-based violence and human rights in Taizz. © UNFPA Yemen

For women like Ameera*, this brutal conflict has been only the latest chapter in a lifetime of abuses.

Tossed back and forth

“My father passed away when I was in first grade, leaving behind my mother and the three of us. My mom used to beat me a lot. She hated me,” said Ameera, wiping away tears. “She used to tear my books and discouraged me from studying. I did not know why.”

A marriage was arranged for Ameera when she was in the seventh grade. “When I was told that I would get married, I did not give it a second thought. Marriage then meant an escape from the daily violence.”

Her husband took her to his village, and she quickly became pregnant. She was 15 years old.

But married life was not a reprieve from abuse. “Disputes between us were growing day by day. I had to leave him and stay in my family house for long periods – sometimes for months and sometimes for a year.”

“My brother and I used to be close friends when we were kids.” But as an adult, he fell under the influence of thugs and criminals, Ameera explained. “He disappeared for months, and when he returned, he was not the brother I used to know.”The beatings by her mother resumed. This time, her brother joined in the violence.

“He sent my babies away”

To support her children, Ameera found a job, but her mother seized the income. “My daughters and I were not getting anything from the money I was earning.” 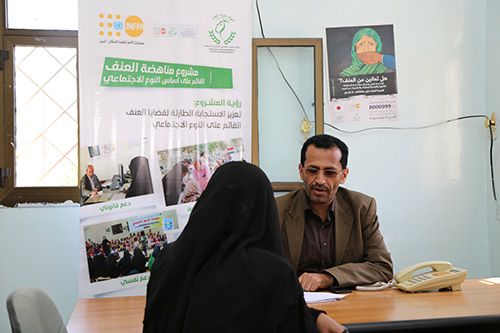 After more than a year, her husband came for her. “I did not hesitate to go with back him. I wanted to run away from the hell of my mother and brother.”

But the reconciliation did not last.

“Problems rose again between us, and he sent back me to my family house. By this time, I was pregnant with my third child. When I went back, my brother asked me to get a divorce, and I agreed on a condition that my kids would be in my custody.”

Her brother did not honour this agreement, quickly sending Ameera’s children to their father.

“He sent my babies away... All I wanted was to see them, but my brother threatened to kill me if I even tried.” Ameera broke down sobbing. “Imagine, I was stealing away for moments when my daughters were going to fetch water so I could see and talk with them without the knowledge of my family.”

Finally, she says, “I ran away from this hell.”

Police burst into the shelter

In the spring of 2009, Ameera found the women’s shelter in Sana’a, the capital. Operated by the Yemeni Women’s Union, with support from UNFPA, it was the first shelter of its kind in the city. 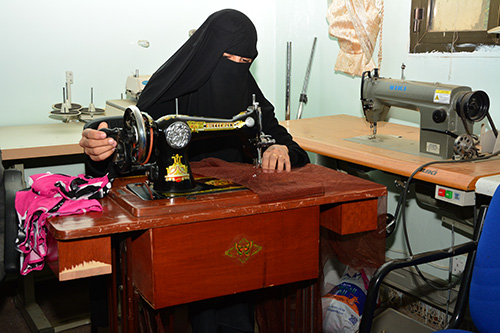 “When Ameera came to us, she was devastated and psychologically she was in a really bad place. All I wanted was to save this tiny girl,” said the shelter’s director. “I felt that if we did not help her, then she would be lost.”

The shelter keeps a low profile. Even so, Ameera’s brother learned about it, and called the police. Soon after, police forces burst into the building, with five judges in tow.

“They thought that the shelter was a place for trafficking women. The concept of the shelter to embrace women who are subjected to violence was not known then,” the director said.

But the brother’s revenge backfired.

“The police and justice system got to know about us and the services we are providing to women and girls. Since then, we have established a good network with them, and they have helped us a lot,” the director explained, laughing.

Ameera learned sewing and crafts skills in the shelter. Eventually, she remarried and started her own business.

“I make wedding dresses, cotton pyjamas and clothes that compete in the market,” she told UNFPA. “My business was thriving, but the war has now destroyed everything.”

Once more, her world came crashing down around her.

“My husband could not cope with this economic misery and started to become violent. He told me to go back to shelter, so here I am,” she said, holding back tears.

Still, she says, having a safe place to rely on has made all the difference.

“I found love and tremendous support here in the shelter,” Ameera said. “I never considered it a shelter. I feel it is a palace, and I am the princess.”