"Is there a tipping point? When will we finally say ‘enough’ to violence and discrimination against women and girls?” Dr. Osotimehin said at the 2014 annual session of the Executive Board of UNFPA, the UN Development Programme and the UN Office for Project Services, taking place this week in Geneva.

Gender-based violence is one of the most prevalent human rights violations in the world. 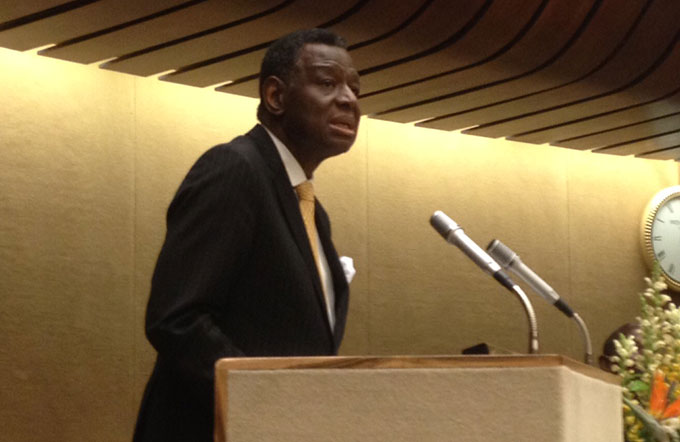 “One out of every three women in the world, in every country and from every background, will experience physical or sexual violence in her lifetime,” Dr. Osotimehin emphasized.

“They are not safe at school, not safe fetching water, not safe on a university campus, not even on the steps of a courthouse or in their own homes.”

These crimes cast a long shadow.

Survivors of intimate partner violence, for example, face increased risks of HIV and other sexually transmitted infections, and their children have worse health outcomes, according to studies by the World Health Organization, the World Bank and others.

Both gender-based violence and entrenched discrimination create barriers to jobs and education, perpetuating a cycle of injustice that can stretch over generations.

“When will we finally bring back our girls – all our girls and women – to their schools, to the workforce, to their rightful place alongside men and boys at the table where decisions are made, and away from child marriage, away from early pregnancy, away from HIV infection, away from violence and harmful practices that strip them of their dignity and, in the worst cases, deprive them of their lives?" Dr. Osotimehin said.

In his speech, the Executive Director highlighted the many concrete results achieved by UNFPA in 2013, improving the quality of lives around the world.
Gender equality
• UNFPA helped 123 countries adopt international agreements and national laws and policies to advance gender equality, and strengthened the capacity of 86 nations to eliminate gender-based violence
• With UNFPA support, more than 4,000 communities abandoned female genital mutilation/cutting, compared with 1,677 in 2011
Maternal Health
• UNFPA supported 38 countries in strengthening emergency obstetric care and 43 countries in improving midwifery
• UNFPA helped train more than 10,000 midwives, in the last five years; they assist 1.75 million births annually
• UNFPA supported more than 10,000 fistula repair surgeries in 2013, nearly 30 per cent more than in 2012.
Family Planning
• UNFPA helped 95 countries improve access to and choice of contraceptives
• UNFPA helped several countries achieve significant increases in contraceptive prevalence rates in recent years, including Burkina Faso, Burundi, Madagascar, Niger and Sierra Leone.  In Burundi, the rate rose from 1.2 per cent in 1987 to 27 per cent in 2013.
• UNFPA remained the world’s number one supplier of female condoms, at 20 million provided. It also supplied 1 billion male condoms
Adolescents and Youth
• In 2013, 71 per cent of UNFPA country programmes included separate outputs on youth, compared to 7 per cent in 2011
• UNFPA supported platforms for youth participation in 82 countries and advocated youth issues in international forums
• UNFPA helped 102 countries design and implement comprehensive, age-appropriate sexuality education programmes for young people
Humanitarian response
• In 2012, UNFPA implemented 70 life-saving programmes in 39 countries, and in 2013, the number rose more than 50 per cent through 105 programmes globally
See more achievements in UNFPA's 2013 Annual Report

Equality the key to development

This year marks the 20th anniversary of the International Conference on Population and Development (ICPD), where a consensus placed individuals – and their human rights – at the centre of development efforts.

“2014 was an important year for UNFPA, particularly in relation to the ICPD,” said Peter Thomson, President of the Executive Board and Permanent Representative of Fiji to the United Nations.

A global review, released earlier this year, revealed “the achievement made and the challenges that remain two decades after the landmark ICPD,” Mr. Thomson noted. The review found improvements in the health and status of women and girls – but, as Dr. Osotimehin said in his remarks, “we still have a long way to go.”

Nowhere in the world are women fully equal to men in political, social or economic power, according to the review. These inequalities stand in the way of development, limiting progress on a variety of efforts – from the elimination of child marriage to the provision of universal access to sexual and reproductive health services.

“It is crucial that we address the persistent discrimination and inequalities hitting the poorest and most marginalized among us,” the Executive Director said. “And it is vital that we uphold the rights of women, girls and all young people – for their own dignity and well-being, but also because doing so is the key to meeting any future development goals.”