ITURI PROVINCE, Democratic Republic of the Congo – Several weeks ago, a woman brought her 11-year-old daughter, Anne*, to a UNFPA-supported health facility. Their family had been uprooted by the conflict in Ituri Province and, in the chaos, Anne was sexually assaulted.

A nurse welcomed the girl, who was too terrified to speak. With a lot of time and patience, clinic staff helped Anne feel comfortable enough to tell her story and consent to an examination. A social worker began to help her through the healing process.

“Since the beginning of the year we have seen an escalation of various forms of violence against women and girls in conflict-affected areas of Ituri, North Kivu and South Kivu,” said Sennen Hounton, UNFPA’s representative in the Democratic Republic of the Congo.

Extreme deprivation has increased the risk of exploitation, as well. “Women and girls are not only exposed to sexual violence during conflict or displacement,” he noted. “Given a lack of opportunities, displaced women and girls are turning to survival sex to meet basic needs such as health care and food.”

In the first half of 2019, some 17,000 survivors of gender-based violence received support from humanitarian actors in the country, including UNFPA, with major gaps in service observed in key hotspots.

The United Nations Office of the Coordination for Humanitarian Affairs (OCHA) estimates that hundreds of thousands of people have been displaced by the crises in Ituri, North Kivu and South Kivu. The ongoing Ebola outbreak has only exacerbated the vulnerabilities of women and girls.

UNFPA is working with partners to extend access to vital reproductive health services, including care for survivors of gender-based violence, and to protect women and girls from sexual exploitation and abuse.

Anne was able to receive medical and psychosocial care through services funded by the UN Central Emergency Response Fund (CERF) and implemented by UNFPA. Between the end of April and the end of July, UNFPA was able to provide reproductive health care to 70,000 people, and provide critical information and outreach to 600,000 more. These funds will also be able to support an estimated 19,000 safe deliveries and extend access to modern contraceptives to 17,000 women in six crisis-affected provinces of the country.

But the needs continue to outstrip available resources. In North Kivu, for instance, fewer than 30 per cent of health zones affected by Ebola are covered by services to prevent and respond to gender-based violence, even though such violence tends to increase in humanitarian crises.

“We estimate that the humanitarian community needs $91.7 million US dollars, including $44 million for North Kivu, South Kivu and Ituri, to protect women and girls from gender-based violence risks and care for at least 37,500 survivors of violence in 2019,” said Noemi Dalmonte, an expert with UNFPA. “But we are far from reaching this target.”

Today, Anne and her mother are living in a camp for displaced persons in Bunia. It is not safe for them to return home, but they have found safety in a temporary shelter. There, Anne has access to a playground and friends.

UNFPA is urging more support for the women and girls of the country.

“I hereby request the donor community to activate commitments that were made at the recent conference in Oslo on Ending Sexual and Gender Based Violence in Emergencies, in the DRC,” Mr. Hounton said.  “Responders to gender-based violence need renewed support to ensure that life-saving and survivor-centred care is available for women and girls at the very start of a crisis.”

He added, “We need to prioritize the current hotspots to save lives of Congolese women now.”

The overall humanitarian action plan in the Democratic Republic of the Congo is funded at only 30 per cent. 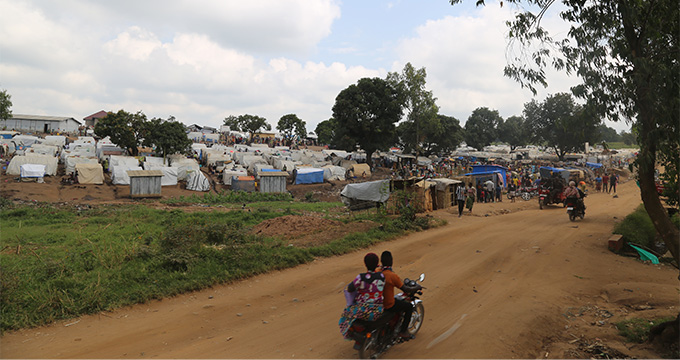