DURBAN, South Africa – Zandile Simelane was just a teenager when her life was turned upside-down. “At the age of 17, I was diagnosed with HIV,” she told UNFPA at the recent International AIDS Conference in Durban, South Africa. The news was a shock.  Sexuality education had not been covered in her school, leaving her ill-equipped to protect herself.

But countries are now undertaking huge efforts to provide girls like Ms. Simelane with the information they need to avoid HIV. In Eastern and Southern Africa – the region most affected by the HIV epidemic – there has been a massive upsurge in comprehensive sexuality education and youth-friendly reproductive health care. 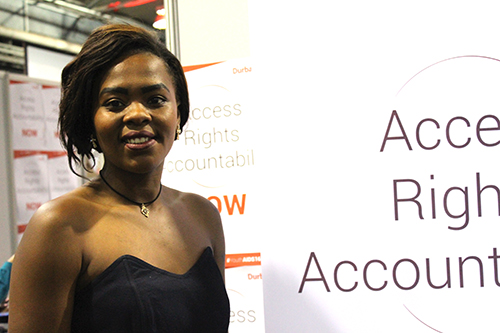 Zandile Simelane was infected with HIV by a “blesser,” an older man who gives expensive gifts to girls. Today, she is a youth activist, teaching young people about how to protect themselves from the disease. © UNFPA/Lindsay Barnes

Today, Ms. Simelane, now 23, knows exactly how she was infected – and from whom. “I know exactly where I got it from,” she said. “It was from a blesser.”

“Blesser” is the term popularly used to describe an older man who “blesses” girls and young women with cell phones, school fees or other expensive gifts, often in exchange for sex. Among HIV prevention advocates, the term has become synonymous with the spread of the disease.

Ms. Simelane is now active in youth organizations, including the UNFPA-supported African Youth and Adolescents Network, “so that I can share my story with young people, for them to realize that HIV exists.”

In her work, she often encounters young people who are just like she was six years ago: “They tend to be ignorant as young people until they are faced with the issue of HIV.” 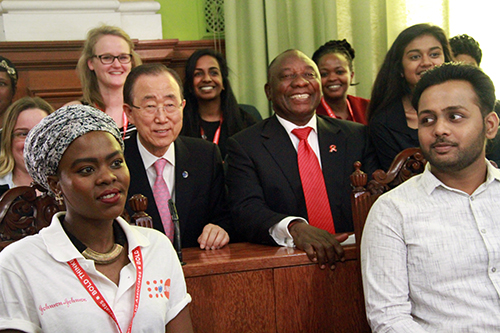 Young people are among the most vulnerable to HIV infection. “This is not acceptable!” United Nations Secretary-General Ban Ki-moon said at the International AIDS Conference. Beside Mr. Ki-Moon is South African Deputy President Cyril Ramaphosa. © UNFPA/Lindsay Barnes

Young people have a right to accurate information about their bodies, including how to protect themselves from disease, experts at the International AIDS Conference emphasized.

Comprehensive sexuality education provides this information in an age-appropriate, culturally sensitive way. It also incorporates information about human rights and gender equality, helping to empower young people to stand up for their health and rights.

Both girls and boys need access to such education. “We cannot forget about the boys, otherwise we face the danger of them being future blessers,” said incoming International AIDS Society President Linda-Gail Bekker.

Countries in the Eastern and Southern Africa Region have made enormous progress in offering comprehensive sexuality education, health and education ministers said at a meeting organized by UNFPA and UNESCO ahead of the conference. These countries have also seen great success in expanding young people’s access to sexual and reproductive health services.

“All 21 countries [in the region] reported having comprehensive sexuality education training programmes for teachers,” said the ministerial progress report. “Fifteen out of 21 countries in the region reported providing comprehensive sexuality education in at least 40 per cent of primary schools and secondary schools.” Seventeen of the countries are providing training to health and social workers to help young people receive nonjudgmental sexual and reproductive health care.

“Now is the time to act”

These achievements follow commitments the ministers made in 2013 to “lead by bold actions to ensure quality comprehensive sexuality education and youth-friendly sexual and reproductive health services.”

UNFPA works with governments to implement comprehensive sexuality education that meets internationally agreed standards, both in schools and through community-based training and outreach. UNFPA also works with partners and health ministries to help ensure access to youth-friendly care.

But there remain significant challenges to reaching young people with these services, including a widespread discomfort with talking about sexual health.

“Our parents never talked to us about sex,” said Jane Ruth Aceng, of Uganda’s health ministry. “Parents haven’t got the models to talk to their children about sexuality. The commitments we are making here will not trickle down unless we discuss how we are going to get the communities engaged.”

And with new HIV infections disproportionately affecting adolescents and youth, there is an urgent need to do more.

“It is time to act now,” said Phineas Magagula, Swaziland’s Minister of Education and Training. “No procrastination.”