NYALA, South Darfur, Sudan — Although soap and absorbent cloths may not be the first thing one thinks of in terms of emergency provisions, a lack of very basic household commodities can have far-reaching repercussions. 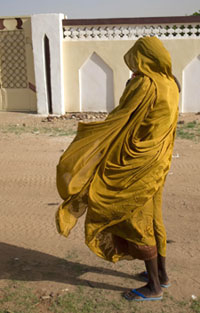 For instance, women who have their periods without sanitary napkins or cloths may be forced to send their daughters to collect food, firewood or fodder for their family’s use, placing them at increased risk of violence. Or girls may miss school, because they stay at home to avoid embarrassing leaks.

“If we can build a school, or distribute food, why not sanitary napkins?” asks Maha Muna, Emergency Coordinator for the Sudanese office of UNFPA, the United Nations Population Fund. “That influences a woman’s mobility. Without it, she has to stay in her tent.

“In the chaos of an emergency, aid is initially ‘life saving’. But after health, water and sanitation have been taken care of, you need to look at ‘life sustaining’ support,” she adds.

“I have no money to buy these sanitary things,” she explains.

The UN has agreed to a minimum initial service package to be provided during emergencies, to provide ante-natal, post-natal, HIV/AIDS, gender-based violence (GBV) and family planning services to internally displaced women and their families.

UNFPA has distributed over 5,000 reproductive emergency health kits including clean delivery kits and post rape kits throughout Darfur in 2006 and 2007. UNFPA is also providing a variety of contraceptives, including condoms and oral contraceptives, as part of this minimum aid package. Darfur has a 7 per cent rate of contraception usage, compared to over 20 per cent in the Sudanese capital, Khartoum.

“Many people in rural Darfur have never seen a doctor. They don’t even know about contraception,” says Sylvia Ness, a UNFPA consultant. “Every man or woman should be able to choose, obtain and use quality products whenever they need them.” 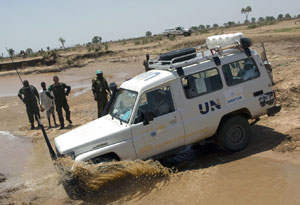 Ness, who was contracted by UNFPA and the Sudanese government, has traveled to South Darfur to conduct an assessment on commodity security and reproductive health. Security concerns are one problem to overcome. Access also is clearly a challenge in getting reproductive health commodities to those who need them.

“Supplies are not going to get out there during the rainy season,” says Ness. “They’re going to get stuck.” To make sure this doesn’t occur, UNFPA is pre-positioning supplies with NGOs.

Ness is optimistic that a strategy can be put in place, because of the strong backing by the Sudanese government.

"The support has been amazing at all levels,” Ness says. “The commitment and the motivation to have proper health care and systems has been stronger than I’ve ever seen.”

The positive effects on maternal and reproductive health are readily visible on the ground. At a clinic in Manawashi, about a dozen IDP women, covered in a candy-colored rainbow of diaphanous pink, orange, green and blue veils, gather under a straw-woven awning to protect themselves from the harsh midday sun.

As her due date nears, each pregnant woman will receive a package containing soap, a new razor blade, clean string for tying the umbilical cord, sterile gloves, a plastic sheet and cotton cloth that can be used to absorb the bleeding following her baby’s delivery -- all provided by UNFPA. The cotton is washable and reusable so that its use will live on long after the baby has been delivered. Used by a skilled birth attendant, the kit can help prevent infection under difficult conditions.

Fatima, with her two-year-old son Omran tied upon her back, sits patiently with the other pregnant women as she waits her turn to be seen by the midwife. She and her family have been IDPs since their village was attacked and all of the family’s cows and camels were looted. She has come to rely on the midwife since complications with her last pregnancy led to her transfer to the hospital in Nyala.

“The midwife is taking care of me. She’s giving me advice. It’s not just for the delivery, but for the follow-up,” she said. “We have no money to offer to cover medical expenses. They give us medical treatment and medicine freely.”