The UNFPA is helping Eritrea’s preparations for its first census, expected in 2002, by providing the country with 20 all-terrain vehicles. Designed for rough terrain and the harsh climate of some parts of the Eastern African country, the double-cabin pick-ups vehicles would be used to reach remote and nomadic populations. A first batch of 11 vehicles has reached Eritrea, which became independent in 1993. The rest are expected there in October. 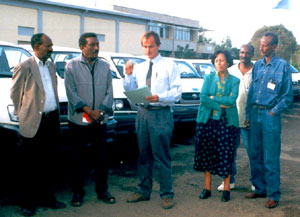 They would also be used by field mapping teams to record the locations of villages, schools, health centres, water points, roads, tracks and administrative boundaries. Census and survey enumerators could also use them to collect data from designated parts of Eritrea.

The UNFPA received the funds for the vehicles from the Canadian International Development Agency (CIDA). The Fund’s Representative, Bruce Campbell, thanked Canada for the resources for the vehicles, which cost about $330,000.

The Fund, which is in the final year of a $6.8-million programme, is helping Eritrea reduce maternal and child deaths by increasing access to reproductive health care. Developed within a human rights framework, the UNFPA’s second programme, of about $10.5 million over five years, is due to start next year. It would help improve Eritreans’ quality of life, with emphasis on reproductive health, gender equality and development. Reproductive health work would enhance community capacity in providing information on safe motherhood, child spacing and referral of complicated pregnancies. It would also advocate community support for eliminating practices that harm reproductive health; for maternity care; breastfeeding immediately after birth; child spacing and use of contraceptives; as well as the prevention and treatment of sexually transmitted infections and infertility.