The United Nations Population Fund (UNFPA) office in Kyrgyzstan recently held a workshop in the capital, Bishkek, to promote the implementation of the Programme of Action of the 1994 Cairo International Conference on Population and Development by increasing awareness of the country’s population concerns. The workshop was also intended to help Kyrgyzstan develop a national population strategy that would deal with such issues as migration, the environment and reproductive health. Held over two days in late September, it attracted more than 30 representatives of Government, non-governmental organizations and the media.

“We have arranged this training to…encourage awareness of demographic factors (population growth, fertility and mortality rates, geographical distribution and migration) … and develop national programmes in the area of population, as well as a population strategy which addresses the linkages between the environment, population growth and sustainable human development,” said the United Nations Resident Coordinator and UNFPA Representative in Kyrgyzstan, Ercan Murat, at the opening ceremony. “The main goal of the UNFPA in Kyrgyzstan is to help the Government of the country achieve a balance between social and economic development and changes in the Kyrgyz population growth.” 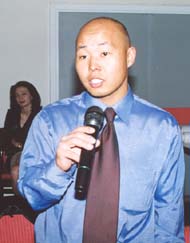 Participant Taalai Tazabekov, of the International Institute of Strategic Research, told a television channel that the workshop provided them with fresh ideas on how to solve existing problems.Photo: UNFPA Kyrgyzstan Office

Organized by the UNFPA and the Institute of Equal Rights and Opportunities of the Kyrgyz Russian Slavic University, Bishkek, the workshop was well received by participants who described it as having significantly increased their knowledge of the issues covered.

“I found the new workshop methods applied by the UNFPA very useful,” said Taalai Tazabekov, a participant and specialist at the International Institute of Strategic Research, during an interview with a television station. “The workshop helped us to have fresh ideas on how to solve existing problems, not only in the economy but also in the population sphere as well. The problems of migration, urbanization and many others are very important and need carefully thought-out solutions.”

The UNFPA has been assisting Kyrgyzstan for almost 10 years, with a census and reproductive health, especially in remote areas.