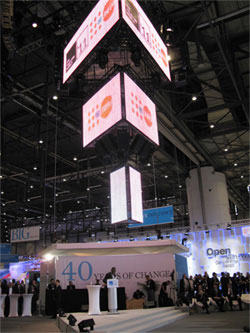 The shift signalled (in advance) the arrival of a world of 7 billion people, expected on 31 October. It also heralded the launch of an SMS campaign by UNFPA Executive Director Dr. Babatunde Osotimehin.

“Our goal is to register 7 billion actions by 7 billion people, by connecting people and communicating with people,” he said, holding his Blackberry above his head and calling on the audience to join the campaign: “Send your text message, 7B to 995.”

As he entered his own message, guests in the exhibition hall fell silent as they tapped 995 on their own smartphones.

UNFPA’s Executive Director was introduced by Hamadoun Touré, Secretary-General of the International Telecommunications Union, which partnered with UNFPA in the campaign. He reminded those present that mobile technologies are helping change lives and highlighted the importance of networking and partnerships in a world that so rapidly reached 7 billion.

The SMS campaign is part of the 7 Billion Actions initiative, which UNFPA convened to bring together individuals and institutions around campaign themes designed to make a world of 7 billion people a better place for all.

The cellphone number was provided by Swisscom, the Swiss telecommunications provider, to those wishing to join the campaign.