DHAKA, Bangladesh — On the third and final day of an official visit to Bangladesh, Thoraya Ahmed Obaid, the Executive Director of UNFPA, the United Nations Population Fund, promised computers to a group of young people at a health clinic in the capital and addressed thousands of imams, urging them to promote the full and equal participation of women in society. 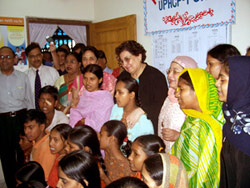 As she walked into the reproductive health clinic in Dhaka, Ms. Obaid was given a traditional greeting — showered with orange flower petals that soon covered her hair. Led upstairs, she was briefed by clinic staff on the services they provide: family planning, adolescent-friendly information and services, maternal care, the management and treatment of sexually transmitted infections including HIV, and response to violence against women.

One in three visitors to the centre is poor. Most are young women who had no place to turn before the clinic opened in 2001. The centre, the first of its kind in South Asia, is a public-private partnership that provides a model for innovative health care provision in a country where access and quality of care remain daunting challenges.

During the past five years, the number of visitors has risen steadily and now about 100 deliveries are performed each month at the centre. It is part of a wider network that extends to 11 areas of the city covering 41 per cent of the population, a total of 9 million people.

UNFPA is the only UN agency in Bangladesh that supports health services to the urban poor, a population that is rising by 4 per cent every year as people migrate from the countryside in search of better opportunities. Surveys show that slightly over half of the urban population in Bangladesh is living below the poverty line. 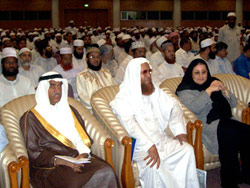 Ms. Obaid was a guest of honour at the Grand Conference of Imams. Photo: UNFPA

In the adolescent corner, Ms. Obaid asked the young women if they were ready to be married. They quickly replied that they did not believe in child marriage. When asked if they knew how to prevent HIV infection, they said yes, matter-of-factly citing the ways. Asked if they had seen a husband beat his wife, they said, “a lot,” and if they thought it was okay, replied that it was against the law and should be reported. They also said that if they saw couples fighting, they would bring them to the clinic. And when Ms. Obaid asked them if they would like computers, they smiled, clapped and cheered.

Later in the day, Ms. Obaid was a guest of honour at the Grand Conference of Imams, which was opened by Bangladesh Prime Minister Begum Khaleda Zia, who cited their role in promoting tolerance, equal rights and social welfare.

Speaking to the crowd of thousands dressed in white gowns and caps, Ms. Obaid won approval by citing Arabic verses of the Koran. She spoke of Islam’s assertion of the “right of girls to life, and not any life but to a life of dignity and respect, in which women are given both political participation and economic independence.”

The Grand Conference of Imams is supported by UNFPA and the Government of Bangladesh as part of an effort to educate imams about reproductive health and rights and the empowerment and equality of women. “We hope the imams who have already received training/orientation are contributing to bring positive change towards the status of women,” Ms. Obaid declared. “Being at the grassroots level and close to the community, you are in a unique position not only to save the lives of women and infants, but also to support women’s participation in the overall development of the society.”

She concluded by calling upon the imams to ensure that “the rights of women as members of the society are well guarded and protected.”

As she left the huge conference hall, which was filled to near capacity, Ms. Obaid was stopped repeatedly by groups of imams who praised her words and pledged their support.