SHEIKH MAQSOUD, Syria – Two mobile reproductive health teams have been deployed to the Sheikh Maqsoud area of Aleppo following the arrival of a UNFPA and Syrian Arab Red Crescent mission on 28 December, the first time a UN agency has entered the area with aid for distribution.

There are an estimated 65,000 people in need in Sheikh Maqsoud, the majority of them women, children and elderly persons. This number is expected to change as more displaced families return to the area. 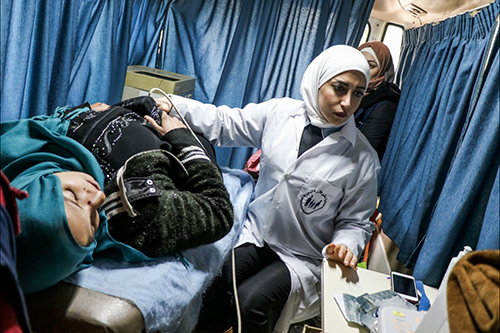 Two mobile reproductive health teams have been deployed. Only one health facility is operational in the area, not sufficient for the estimated 65,000 people in need. © UNFPA Syria

Only one health facility is operational in Sheikh Maqsoud, serving an estimated 50 patients per day – not sufficient to meet local needs, where about 3,000 women are estimated to be pregnant.

“Conflict typically puts these women and their babies at risk. Physical hardship and emotional trauma often complicate delivery,” said Massimo Diana, UNFPA’s Representative in Syria. “Health services are deteriorated after the seven years of crisis in Syria, in addition to the limited supplies and high patient loads.”

The existing health facility is poorly equipped, with no capacity to perform Caesarean section operations or other major surgeries. There is no ambulance available to transfer critical cases to hospitals outside Sheikh Maqsoud.

Humanitarian responders also noted that most roads are in disrepair and choked with mud, limiting access. The area also lacks an operating electrical system, forcing the community to rely on generators and expensive fuel, when available.

“We at UNFPA in Syria are working to deploy emergency supplies and equipment to make childbirth safer and to support medical interventions,” Mr. Diana said. 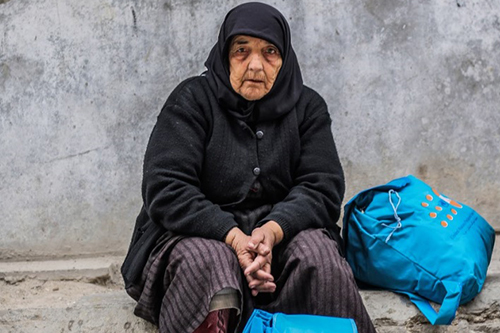 Many women had been without care for years.

“It was a long day,” said Dr. Joud, head of one of the mobile teams. “Poor women,” she added, “how much help they need.”

In addition to lacking quality reproductive health care, humanitarian workers observed a large number of people living with disabilities, including wheelchair users, as well as families in desperate need of warm clothing for the winter.

UNFPA workers also spoke with local families about challenges to maintaining their children’s education. Despite the shortage of school supplies, parents are determined to keep their children in school. “I’ll make sure that my daughter will finish her education,” one man told UNFPA.

UNFPA and its partner, Syrian Arab Red Crescent, are planning to open three reproductive health centres in the area as soon as possible. © UNFPA Syria

UNFPA’s efforts in Sheikh Maqsoud are supported by the European Civil Protection and Humanitarian Aid as well as the governments of Canada, Norway and Sweden.