SARAJEVO, Bosnia and Herzegovina / BELGRADE, Serbia – Millions of people across the Balkans are facing the aftermath of the worst natural disaster to hit the region in more than a century. As the waters retreat, exposing a vast scale of destruction, UNFPA is working on the ground to address the needs of those most affected.

Heavy and uninterrupted rainfall beginning in May led to extensive flooding, which wiped out roads, houses, schools and hospitals and severely damaged the agricultural industry and energy sector.

Health facilities have also been hit hard, and preventive routine public health programmes like antenatal and post-natal care and family planning services have been disrupted. In Serbia alone, health facilities in 17 municipalities are dysfunctional and in need of repair.

“When emergencies like this strike, life changes in a moment. This natural disaster destroyed thousands of homes and forced people to flee,” said Doina Bologa, UNFPA Representative in Bosnia and Herzegovina and Country Director for Serbia.

“While fleeing, people are in need of basic necessities – ranging from food and water to hygienic supplies and medical care. UNFPA is striving to assist the governments in restoring and improving the lives of the flood victims,” she added. 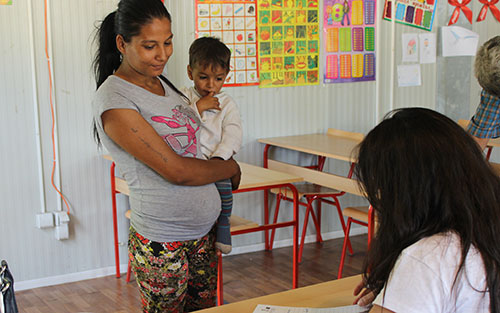 UNFPA delivers hygiene and dignity kits to a Roma settlement on the outskirts of Belgrade, where no previous assistance had been provided. Photo credit: UNFPA Serbia.

Ensuring dignity for the most vulnerable

In its immediate response to the crisis, as part of the United Nations-coordinated flood response in Bosnia and Herzegovina, UNFPA secured a first load of 4,000 hygiene kits for vulnerable groups like the elderly, the Roma population, young people and women who had been victims of wartime violence, among others.

“UNFPA, through World Vision, was the first organization to provide the Roma population with hygiene kits in key municipalities,” said Aleksandar Masic, Representative of the Republika Srpska Roma Union in Bosnia and Herzegovina.

These hygiene kits and dignity packs allow people to keep clean and maintain some dignity in the face of tragedy. They have been tailored to the needs of affected families and contain basic necessities like soap, toothpaste and toothbrushes, shampoo, underwear, a t-shirt, razors, and hygienic pads for women.

In Serbia, 3,000 kits were distributed in the first phase of the relief response, with the support of numerous volunteers. UNFPA, in cooperation with the Serbian Red Cross, also distributed 2,500 kits to the hardest-hit municipality of Obrenovac.

The harsh living conditions in Roma settlements, which often lack drainage systems and electricity, have been exacerbated by the receding water and present a serious health hazard to the population.

More than 300 kits have been distributed to heavily damaged Roma settlements in the Belgrade area, where no assistance had yet been provided.

“For us, every day is like these floods and a state of emergency. No one visited us for a while, [until] now,” said a Roma couple living in a settlement in Belgrade upon receiving the kits. 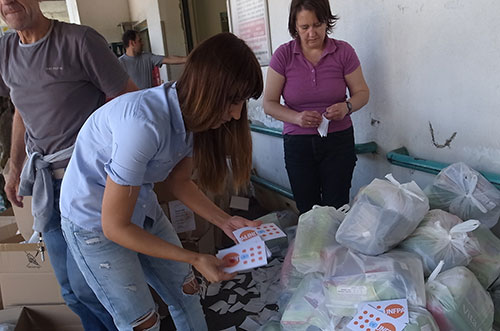 The UNFPA team in Sarajevo, joined by a dedicated group of volunteers, pack hygiene kits for distribution. With support from various international and local organizations, 4,000 hygiene kits were delivered across affected areas in Bosnia and Herzegovina. Photo credit: UNFPA Bosnia

UNFPA has also agreed to procure an additional 500 hygiene kits tailored to the specific needs of older people.

Devastation on an enormous scale

The heavy rainfall that caused the flooding in May was the highest ever recorded in the Balkans.

The floods have claimed the lives of 25 people in Serbia and affected more than 1.6 million people – 22 per cent of the population. Estimates indicate that more than US$350 million will be required to repair public infrastructure alone, while the European Bank for Reconstruction and Development put the damage at roughly €1.5 billion to €2 billion.

Twenty-five people were also killed in Bosnia and Herzegovina, where an estimated 1.5 million people – 39 per cent of the population – have been affected by the flood waters. Tens of thousands had to evacuate their homes.

The UN Country Team in Serbia is currently shaping the next phase of relief response ahead of the post-disaster needs assessment, which is scheduled to begin on 10 June.

Additional UNFPA support will take place in the upcoming recovery phase in Bosnia and Herzegovina. Based on the findings of the post-disaster needs assessment in the affected areas there, UNFPA will focus on supporting the primary health system and emergency obstetric care.